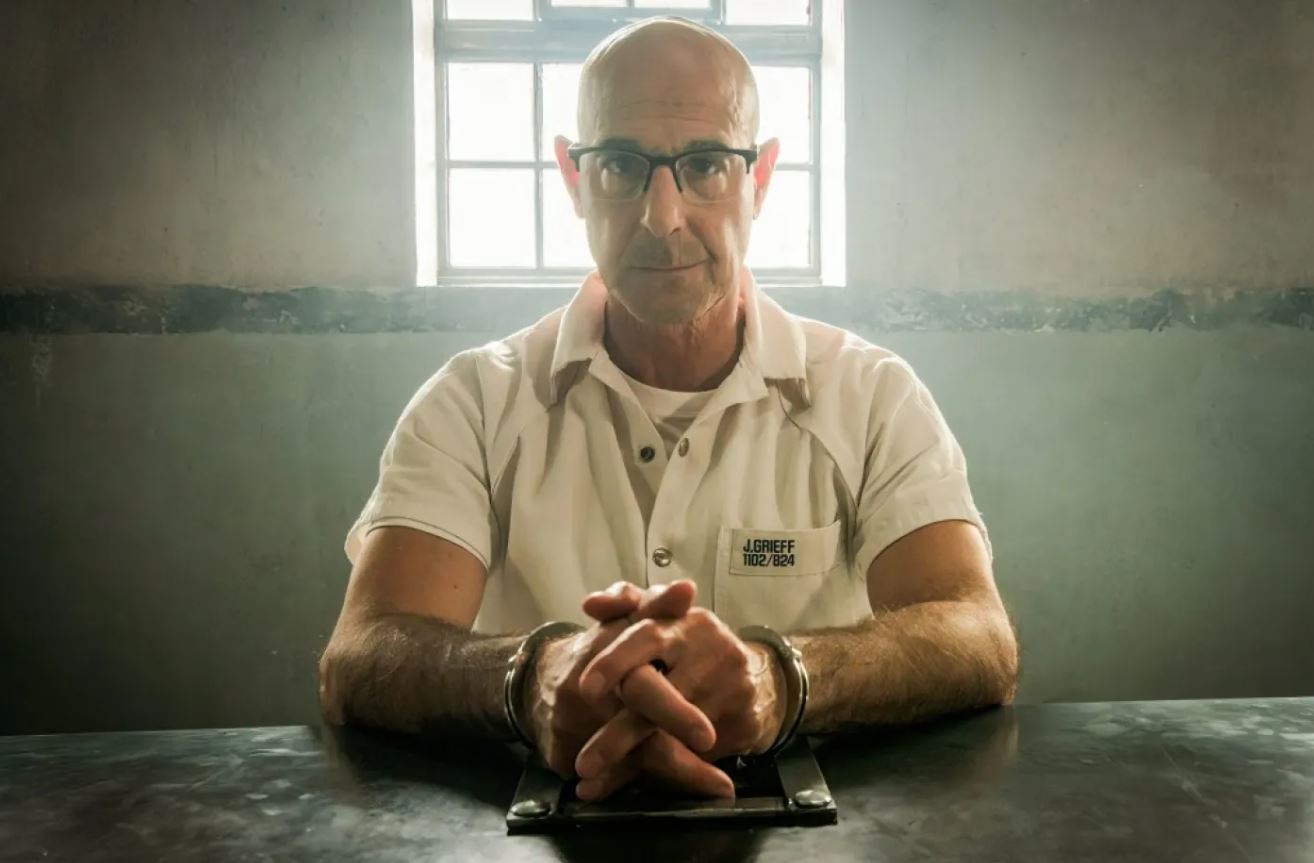 Criminologist Jefferson Grieff (Stanley Tucci) is on death row in the US, for killing his wife. “Everyone is a murderer. You just have to meet the right person,” he quips, to British journalist Beth Davenport (Lydia West), who’s writing a piece on how people ask him to investigate unsolved crimes from behind bars.

When she receives a desperate text from a woman who recently came to her aid her during an assault on the tube, Beth asks Grieff for his help.

Back in the UK, this woman, Janice Fife (Dolly Wells) is a maths tutor for teenager Ben (Louis Oliver), the son of small-town vicar Harry Watling (David Tennant), whose verger has just given him a thumb drive containing images he doesn’t want his mother to find.

Through a series of misunderstandings, Janice sees the horrific nature of the images, assumes they belong to Ben and threatens to call the police.

Harry is prepared to put his own reputation on the line to protect his son and the vulnerable verger, but he doesn’t get a chance before – during a struggle – Janice takes a tumble down the stairs into his cellar.

Is everyone really a murderer – if they meet the right person? And have a bad day?

At its heart, Inside Man explores an interesting premise – plainly set out by Stanley Tucci’s erudite murderer in the opening moments; given the right set of circumstances, can a righteous and honourable man – a man of God – be driven to kill, in order to protect those he loves and feels compelled to protect?

As the drastic sequence of events unfolds in this peaceful rural community, it’s plain to see that even for a vicar, the idea of getting rid of the person who’s jeopardising the future of everyone he loves could be quite tempting. And while she clearly has justice at the forefront of her mind, his dispassionate victim does little to earn any sympathy – either from Harry, or from us.

Meanwhile, across the pond, a similarly dispassionate and blinkered killer is wheeled out with an eccentric side-kick to solve criminal mysteries from the comfort of his cell, as  the clock ticks down to his execution.

There are two perfectly interesting and engaging storylines going on here, but the rope that binds them together is somewhat frayed; Beth is unconvincing as a journalist, the idea that a rookie reporter would fly across the world to interview a death row inmate is as preposterous as the idea that a death row inmate would be allowed to accept visits from all and sundry and investigate their mysteries, with more privileges than most prison staff would have. Back in the UK, it just feels as unlikely that events would have snowballed as they did – as it is that Harry and his family wouldn’t have realised how much information police could garner from mobile phones and computer file metadata and so on. The chronology – on both sides of the Atlantic – makes much of the plotting hard to accept.

It’s nail-biting stuff – but only if you can take everything you see with a bag of salt. And don’t talk to me about the ending – not the dramatically unsatisfying ending that can be excused in the circumstances, but the post-credits tag that takes everything in a completely different direction, serving no purpose other than to leave the BBC with no choice but to commission a second series.

It’s a creditable attempt to make a piece of bold, challenging television, testing an interesting psychological hypothesis, that’s let down by its own self confidence and takes for granted the good will of the audience.