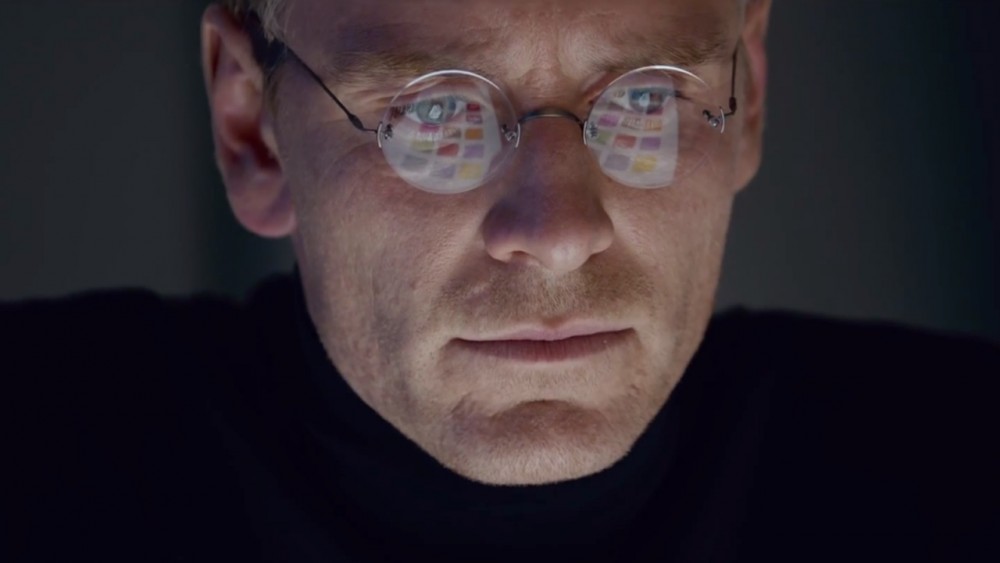 1984: Apple’s charismatic, if despotic co-founder Steve Jobs (Michael Fassbender) is just minutes away from the big fanfare launch of the company’s revolutionary new personal computer, the Macintosh. As hundreds of computer geeks and journalists gather outside the theatre, his assistants are running around inside and backstage, checking that everything in the presentation is going to work. But one of his engineers, Andy Hertzfeld (Michael Stuhlbarg), has the bad news that the software that makes the Macintosh say “Hello” is broken. Jobs’ ex girlfriend Chrisann (Katherine Waterston) is loitering in his dressing room, demanding money for the daughter, Lisa, who he refuses to accept is his. His Apple co-founder Steve Wozniak (Seth Rogen) has a favour to ask. His boss and father-figure John Sculley (Jeff Daniels) is backstage to offer encouragement. A technology journalist, Joel Pforzheimer (John Ortiz) is hovering around, hoping for something to go wrong. And Jobs’ head of marketing Joanna (Kate Winslet) is right behind him, trouble-shooting, at every turn.

1988: Out on his own, Jobs is minutes away from the launch of his next big product – an insanely expensive black cube, that he claims contains the kind of computing technology that will change the world. Raising the curtain on his new company, NeXT, Jobs is full of his usual bluster, despite the scepticism of some of those around him. Chrisann is still waiting around with Lisa, demanding more money. Joel is still looking for his exclusive. Sculley turns up, unannounced, to settle some scores. Joanna is there to bring in those Jobs is willing to see and protect him from those he doesn’t.

1998: Back at Apple, there’s a real sense that the next product, the colourful and curvy iMac, is the one to turn the company’s fortunes around. As Jobs is preparing for his latest launch, the usual suspects are lurking in the shadows. Sculley turns up with a gift, Joel is still looking for his exclusive, Wozniak still wants his favour, Andy is rubbing him up the wrong way over Lisa, who’s turned up, but doesn’t want to see him. And Joanna is still playing gatekeeper and spin-doctor.

The hardest thing about any biopic is deciding which period of an interesting life to depict. Danny Boyle’s answer is not to limit himself to one. His biopic of the only one of Apple’s co-founders that most people can name, Steve Jobs (Michael Fassbender), doesn’t follow a traditional structure for the genre.

Rather than following a particular period of its protagonist’s life, Aaron Sorkin’s mellifluous screenplay shows us only the half an hour or so before each of three launch events that he sees as key to defining the genius behind Apple’s most successful products.

Before seeing the film I, for one, was sceptical: “Why would I want to see a film about one of the founders of Apple?” I thought. Among others, the director of the London Film Festival, Clare Stewart, who selected the film to close this year’s event, assured me that she felt the same – but once she saw it, she was hooked.

But while Danny Boyle’s typically frenetic directorial flourishes marry seamlessly with Aaron Sorkin’s majestic, West-Wing-style walking and talking, and the performances are as fluent as they are faultless, my initial thoughts were vindicated.

Three product launches and two flashbacks – to the garage where Jobs and Wozniak argued over their first personal computer and the restaurant where Jobs first brought Sculley on board – aren’t really enough to give the measure of the man. We don’t get to know enough about the protagonist and his goals and his past to care enough about him to get emotionally involved.

We learn that he’s bossy, blinkered, selfish and certainly self-important but while he’s clearly a man of vision, we don’t really know what that vision is, except that he wants people to need his products – and only his products. But could this not be said of any entrepreneur? Show me the successful businessman who’s kind and cuddly and spends all his time being nice to everyone, rather than concentrating on his dream.

It can’t even be said of Jobs – or at least this portrayal of him – that despite his many failings, he was always right; of the three products we see launched, two flopped and the other one didn’t achieve the sales that were predicted – while there was no mention of the fact that without one of his apparent failures, Sir Tim Berners Lee could never have invented the World Wide Web and the Apple product that really did take off, sending the company into the business stratosphere and arguably changing the world, the iPhone, didn’t arrive until many years after Fassbender’s Jobs comes to terms with just one of the hang-ups from his earlier years at the close of Boyle’s film.

So, history tells us that this driven man eventually achieved his dream, but this film doesn’t.

Many biopics reveal qualities about their protagonists that make their successes all the more unexpected, but the Jobs we meet is not autistic, blighted by mental or physical illness, he doesn’t have to battle prejudice or pull himself up out of poverty, and showing occasional flashes of warmth, he’s not even socially challenged – just driven; only his adoption seems to be a recurring factor in the choices he makes and the directions he takes.

Seth Rogen’s Wozniak comes across as a bit of a whining loser – perhaps he is? Kate Winslet’s trouble-shooter is the perfect foil for Michael Fassbender’s know-it-all conductor – the other characters, without exception, being players in his orchestra. Fassbender’s supremely confident performance does justice to a remarkably snappy and information-rich script and it’s particularly welcome that no attempt was made to make him look or sound like Jobs – for the purposes of this film, at least, he IS Steve Jobs and no-one would ever doubt it – not even the real-life Wozniak himself, so he says.

But while the film is tremendously well made in all respects, it’s fractured nature necessarily militates against satisfying story-telling and prevents a full picture of its protagonist developing. It’s essentially three praiseworthy short films that fit together effectively as a set but less so as a coherent whole. Five snapshots (three product launches plus two shorter flashbacks) don’t tell a life story – they show the extent to which Jobs changed from moment to moment and how his relationships with other key figures changed – or otherwise – over those same periods – they hint at what drove the man but they don’t take you on a journey. Rather than accompanying him on a holiday, you feel like you’re just being shown the photo album – worthy as those photos might be in their own right.