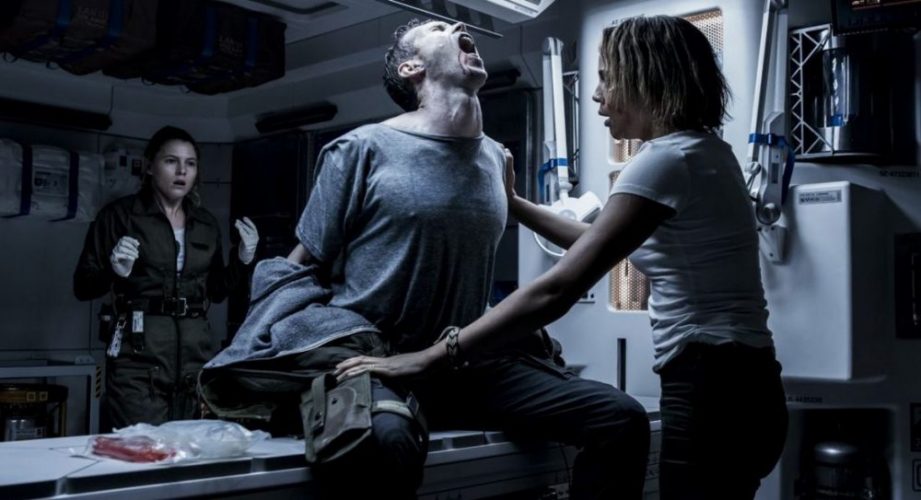 Then, a neutrino damages some of the ship’s systems and some of the crew wake up early in their hibernation pods.

If the names and numbers hadn’t been changed, you might have thought you’d popped back to see Passengers.

But from the moment that the captain of the ship (an uncredited James Franco) dies in his pod, Sir Ridley Scott’s latest prequel to his Alien franchise takes off on its own path.

The newly promoted captain Oram (Billy Crudup) decides to divert the ship to a much closer planet that seems to have been sending radio signals that could have come from humans, against the better judgement of his number 2, Daniels (Katherine Waterston).

A team is dispatched to the surface to investigate whether this could be a more convenient alternative to Origae-6 and finds what appears to be a habitable planet – a bit stormy, but anyone from the UK wouldn’t be too put off by that.

But soon, a couple of crew members start feeling unwell and when Oram and his team discover that they’re not the first humans to have visited the planet, they realise that if they can’t get back to the Covenant soon, they might meet the same fate as their predecessors.

There are two ways of considering Alien: Covenant – as a sequel to its direct antecedent Prometheus or as a prequel, sitting somewhere in the middle of the Alien canon. In terms of chronology, style and substance, it’s much closer to the mediocre Prometheus than the classic Alien.

Alien: Covenant is perfectly watchable space horror, but feels awfully derivative – of films both within the Alien canon (from xenomorphs bursting out of bodies, rogue transmissions from unknown planets, characters contemplating the origins of human existence) and without (the set-up, as previous mentioned, is a straight repeat of Passengers while armed visitors trekking across unknown territory, being picked off one-by-one has been seen as recently as Kong: Skull Island).

While the production design and visual effects are as impressive as the genre would require and the franchise would demand, the narrative is as pedestrian as any science fiction film you’ll see; crew of colonists divert from distant planet to closer option, find what looks like a perfect alternative until they start being picked off one-by-one by familiar-looking, face-hugging aliens.

The action is taut but the script is unbearably expositional when Michael Fassbender’s synthetic characters are wondering who created their creators and almost totally redundant at all other times.

Setting up Katherine Waterston’s Daniels to lead the fight for the humans in the final act is clearly trying to present us with a new Ripley, but she doesn’t have anything of the ground-breaking gender-barrier-smashing gravitas of Sigourney Weaver. The supporting characters are also oddly cast – it’s hard to take Danny McBride seriously as he attempts to shed his comedy heritage; Billy Crudup’s captain is decidedly bland; while most of the others are simply there to be dispatched at an accelerating rate, so there’s no point trying to give them any depth.

There are a couple of twists –  both of which will be mind-blowing for anyone who’s on board with proceedings, or contrived for anyone who’s feeling left behind by Sir Ridley’s cinematic exuberance. One of them is disappointingly predictable, not entirely convincing and there simply to set up prequel number 3.

But the film-makers are surely discovering that the more films you make in a franchise – especially one that’s so wedded to genre – the harder it is to deliver anything new.

Perhaps the most positive comparison to make is that unlike the Star Wars prequels, neither Prometheus nor this is inherently an embarrassing or even just a bad film – they’re simply not as good as their provenance promises. They don’t add anything to the Alien canon and they leave you with a sense that the film-makers are grasping for worthiness, but they provide satisfactory enough Alien-by-numbers entertainment for anyone who’s content with more of the same and not screaming out for something new.

Perhaps that’s the problem – in space, no-one can hear you scream.