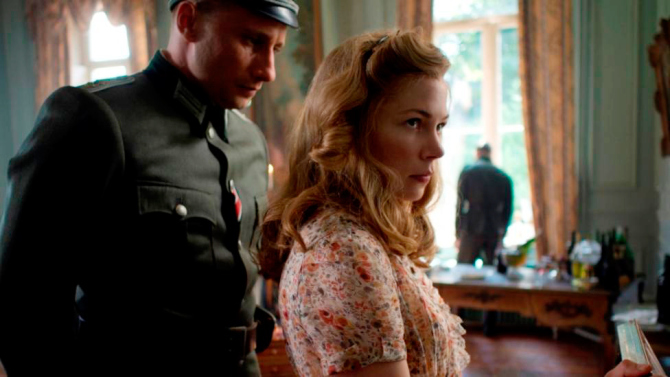 Early in the Second World War, Germany has only recently occupied France. Its senior officers are being stationed in the homes of local landowners.

The earnest Commander Bruno von Falk (Matthias Schoenaerts) is based in the country mansion of Madame Angellier (Kristin Scott Thomas), near a small town not far from Paris.

She’s just discovered that her son has been taken as a prisoner of war so she’s showing her daughter-in-law Lucile (Michelle Freeman) how to run their property business, in case he fails to make it home.

But while the Nazis continue to march across the country and terrorise the French people, Lucile and Bruno develop an unexpected and unacceptable attraction.

As the war progresses and tensions rise, Bruno and Lucile are torn between their love for each other and their loyalty to their countries.

The production design and costumes of Suite Française have a beautiful sense of authenticity and an early set-piece of a Nazi bomber attack on a refugee convoy hints at something impressive to come.

But what we’re given turns out to be a somewhat pedestrian, familiar melodrama taking in familiar themes, such as forbidden love between sworn enemies, hiding fugitives, music conquering all and even a last-minute race against time. The way the plot unfolds is also somewhat clumsy, with far too many set-ups paying off too obviously.

It attempts to give depth to the characters by doing its best to confound our expectations but apart from a handful of central players, it’s all black and white with very little grey.

The story adds a class divide to the geopolitical conflict, highlighting how everyone pulls together in times of adversity, but this device often feels clunky, not least having Focus‘s glamorous Margot Robbie trying to pass as a lowly farm worker, with parents unlikely to have produced such offspring.

And then there’s the accents – thankfully, the film-makers eschewed that oft-used device of having the heroes speaking in English with mock French or German accents, but the choice they go for still feels arch; while the Nazis speak to each other in German, with subtitles, the French all speak English – in English accents – except for a radio broadcast, which is in actual French.

And just to complicate things unnecessarily, once the story is nearing its conclusion, we see the manuscript of a piece of recently-composed piano music eponymously called “Suite Française ” and then we get a caption saying that – and I paraphrase – “Suite Française was unfinished when it was discovered, decades after it was written…” but the second mention refers not to the piece of music we’ve just been shown by to a book, of the same name, on which the film is based.