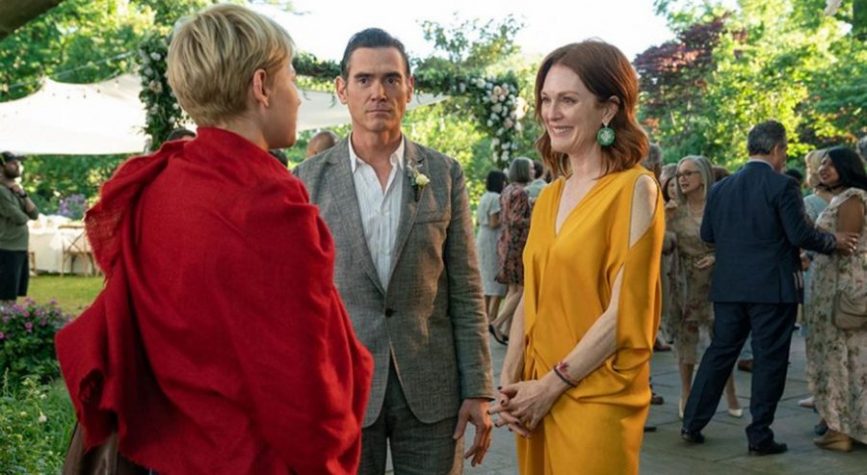 Isabel (Michelle Williams) runs an orphanage in India. It’s desperate for funds and she’s been offered an investment by an American philanthropist, Theresa (Julianne  Moore), but the catch is that she has to fly to New York to sign the paperwork.

Things seem to take longer than anticipated when she arrives and the signing is held up, so she’s invited to the wedding of Theresa’s daughter since she’s there anyway.

At the wedding, she discovers that she has a history with Theresa’s husband Oscar (Billy Crudup), but the revelations don’t stop there.

After the wedding, everything will change – for Isabel and the orphanage – but also for Theresa and her family – in ways that no-one, except Theresa, could have predicted.

After The Wedding has an unusual kind of narrative, in that what begins as an interesting social drama takes a hand-brake turn and suddenly darts off in a totally different direction for the final act, becoming more of what Hollywood describes as a “disease of the week” movie.

What this does mean – apart from anything else – is that there’s little point in trying to work out where the film is going, because until a particular point, two thirds of the way through, you couldn’t begin to guess what it’s really about.

Some of the signposting for the various legs of the journey is a little clumsily done – stern looks, furtive discoveries, sudden shifts in tone, much of which is rather “on the nose;” in one scene, a key character finds something in a draw, but rather than any tension as a big secret emerges, the other character in question is simply talking about it freely in the next scene – what would, in another film, be an inciting moment for the drama, is little more than a device to bridge into the next scene.

It makes a change to have a drama where there are no villains, which does ground it in reality, if the plot itself feels somewhat far-fetched.

Billy Crudup’s central role is gently underplayed but the same can’t be said of  his screen wife; Julianne Moore is a little over the top when it comes to what she presumably hopes will be her Oscar-moment. But Michelle Williams shows her how it’s done, delivering a considerably more powerful performance with little more than a tilt of her head and a pout of her lips.

The narrative might have felt a little more coherent, in places, had it stuck more faithfully to the Danish original.

After The Wedding is an English-language version of the Danish film that secured a Best Foreign Language Oscar nomination for the director Susanne Bier, and the narrative might have felt a little more coherent if the star power hadn’t required it to veer as far from the original.