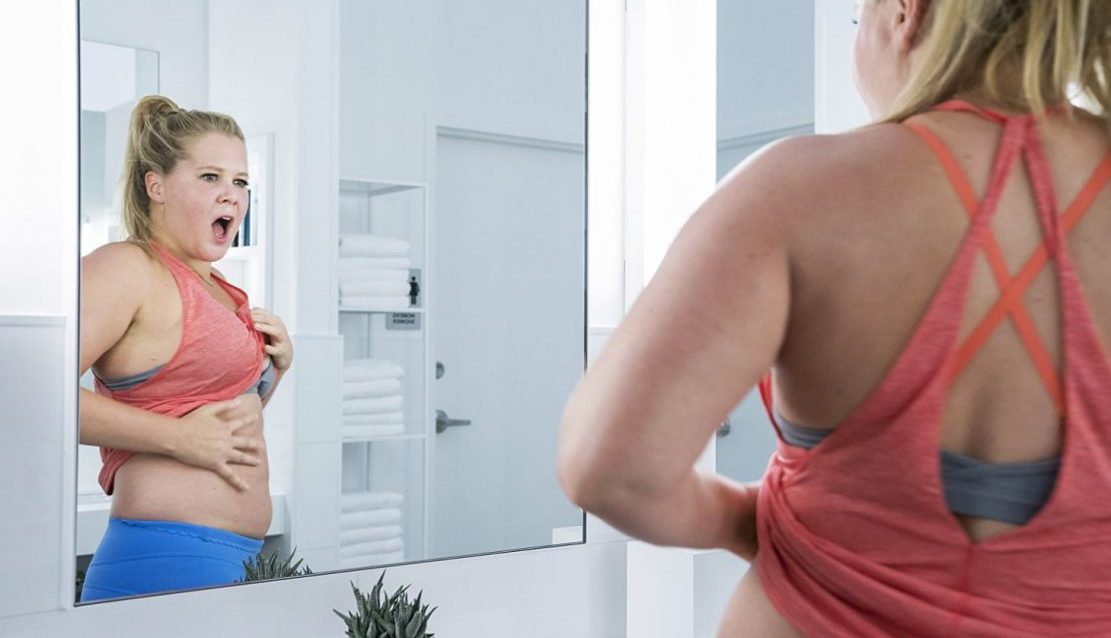 Renee Bennett (Amy Schumer) isn’t happy with her appearance. She goes to exercise classes where the models around her make her feel even more insecure about her body.

She works for the exclusive LeClaire make-up brand – in a dingy basement, several blocks from the glitzy New York headquarters – it’s almost as if the beautiful people are trying to hide her away.

But when the internet goes down, Renee has to deliver some print-outs to her boss and as she enters the reception, she feels like she’s in heaven. She almost faints when she hears that there’s a receptionist job going – it’s way beneath her pay grade, but working with the beautiful people is her dream.

As luck would have it, during an exercise class, she falls off her bike and bumps her head. When she comes around, she looks in the mirror but doesn’t see what she used to; she can’t understand it, but somehow, she’s looking at the kind of stunning, sylphlike woman she’s always aspired to be.

Brimming with newfound confidence, she sets off with a new outlook on life, forging a new career, finding a man and making something of herself in a way that she never thought she could.

But rather than making her a better person, the success she’s achieved by becoming the person she always felt she was inside results in her becoming as shallow as the people she’d always put on a pedestal and soon she’s leaving her own frumpy friends behind.

At a time when diversity is one of the hot topics in Hollywood, with one of the main complaints being no strong roles for women – particularly those who look like normal women rather than like models – this is an urgent time for films that show regular women that they don’t need to be anything other than themselves to succeed.

It’s a really positive – and hugely important – message of self-confidence and believing in yourself, but it’s delivered in such a cack-handed manner as to be one of the most embarrassing films in recent memory.

There’s a sense in which it tries to explore the issues from a variety of angles, which should be praiseworthy, but somehow, rather than coming across as being an intricately woven, intellectually sharp satire on the fashion industry and wider society, it falls as flat as Renee when she slips from her bike – it’s almost as if the writer-directors have bumped their heads and taken all the right ingredients but tried to put them together without a recipe.

That the “better” Renee looks the same to everyone – even to the viewers – should be an important element of the film – it shouldn’t be about how you look and indeed it ISN’T about how you look – but in a film, sometimes you need a visual clue and seeing the way she carries herself after her accident, without seeing how she actually sees herself, makes her look simply deluded.

It’s also very likely to be realistic for someone who’s spent her whole life wanting to be noticed to leave behind her frumpy friends the moment that the pretty people start paying attention to her – but that makes her a tremendously unsympathetic – almost cruel – protagonist.

Relying on audiences wanting to identify with and support a deluded, unsympathetic and cruel central character is perhaps a gamble too far. Her loyal friends are the only characters who emerge from this film unscathed.

The concept has been studied many times on film before – one that springs immediately to mind is Shallow Hall. But the Farrelly Brothers somehow made a warm-hearted film that felt important. It was still about a woman’s body image, but instead of being about a woman’s insecurity it was about the man’s shallowness – you could, therefore, laugh at the man – but in this case, you just pity the woman.

It’s a truth that many women don’t like to accept that much of the most cruel media treatment of women who don’t fit society’s requirements actual comes from women and aimed at female readers – in the form of women’s magazines – so perhaps that’s another reason why it’s a little more difficult to accept that such shallow and cruel behaviour could be coming from woman.

The long-running TV series Ugly Betty also inhabited this space – an unlikely entry into the world of beauty, pulling it off against the odds, but America Ferrera was likeable and – just about – grounded in reality, while her cast of grotesques were both believable in the context – funny.

And that’s one of the biggest problems here; moralising aside, it’s simply not funny enough – worse, it’s not really funny, full stop, which is, of course, unforgivable for what thinks it’s a comedy. A plethora of comedy stereotypes for no good reason is not funny. Michelle Williams talking in a high-pitched voice is not inherently funny. An overweight woman thinking she’s (suddenly) among the most beautiful women in the world is not funny – not least when the plot requires us to know that actually she’s not beautiful – she just thinks she is.

Amy Schumer herself is a hugely talented comedian – when she is performing her own work, such as in the film which broke her onto the big screen, Trainweck. With someone else’s script, the only moments where her true genius shines through feel like ad-libs, where she perhaps strays from the screenplay with a witty aside, or simply a knowing shrug.

But when the main character spends most of the film being guilty of the crime that the film is trying to stamp out – and we’re meant to be supporting her through that – and the multi-layered story is told without any charm to accompany wit that might have been there on the page but never made it to the screen, the important message is buried so far beneath this embarrassing heap of nonsense, that it will be the last thing that anyone takes away from this film.

Ultimately, this film’s biggest crime is losing whatever good will comes along with trying to push an important message at a vital time, risking setting back efforts to achieve the equality that the industry so desperately craves.