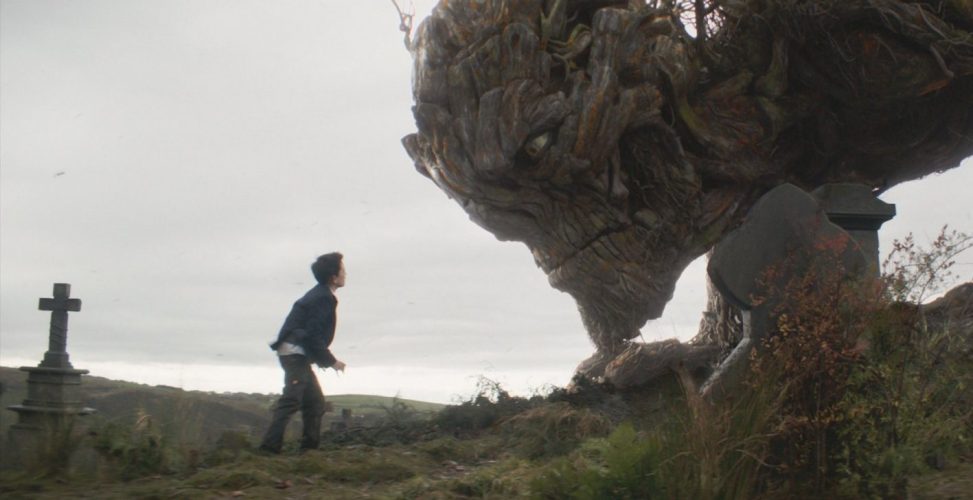 Life isn’t easy for twelve year old Conor (Lewis MacDougall); he’s constantly bullied at school, but gets no solace at home, where his mother (Felicity Jones) has been diagnosed with terminal cancer, his father (Toby Kebbell) has long since moved to America with his new family and his grandmother (Sigourney Weaver) is an overbearing matriarch who creates a fuss if he so much as puts his school bag down in the wrong place.

One night, just after midnight, Conor is woken by a noise outside. He rushes to the window and sees a yew tree unfurl into a giant Monster (voiced by Liam Neeson), which has come not to create havoc and destruction, but to chat; specifically, to tell him three stories that should help him come to terms with the difficulties in his life and turn his weaknesses into strengths.

With the often uninvited encouragement of the Monster, young Conor is forced to grow up fast and confront his fears, as his mother’s health declines, his grandmother struggles to look after him in her absence, his father visits from the US and the school bullying reaches a zenith.

We’ve seen “coming of age” films many times before, and there’s nothing like a terminally ill mother at home and a gang of bullies at school to test the resolve of the most assertive adolescent.

But that’s where the box ticking ends.

The eponymous Monster – whether real or imagined – comes not to save the day but to help our protagonist work out how to save the day for himself. And each time it relates a story, which see it unfold in a different style of animation, providing visual variety like few films, without distracting from the narrative or its message.

What might appear to young children as fairy-tales can be read by the more mature among us as life lessons, helping Conor to beckon adulthood necessarily prematurely – but also ensuring that the film itself can appeal on many levels; as anything from an unashamed story-telling fantasy to a heart-warming coming-of-age drama, depending on where viewers are on the spectrum themselves.

Despite being visually varied, the tales blend seamlessly with the overarching plot, allowing it to flow naturally, without it feeling like a train journey making stops on the way.

Much of the acting feels a little small screen, but JA Bayona’s direction ensures that his vision explodes off the big screen, creating a cinematic delight that tugs at the heart-strings.

At times, the life lessons themselves don’t seem to be as profound as they might, it’s not clear whether they’d even help Conor develop the maturity that his situation requires and the wider narrative sometimes feels a little formulaic.

But the overwhelming feeling you’ll get on leaving the cinema is that you’ve been visited by a Monster that’s helped you reassess your own life for the better.