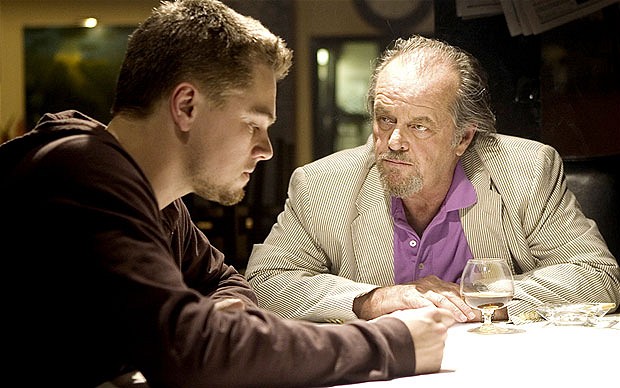 Set in South Boston, the Massachusetts State Police is waging an all out war to smash the city’s top organised crime ring headed by the powerful Frank Costello (Jack Nicholson).

The aim is to bring him down from the inside so rookie Billy Costigan (Leonardo DiCaprio), fresh from the police academy, is assigned to go undercover and infiltrate the mob.

In the meantime Colin Sullivan (Matt Damon), another young cop, is quickly rising through the ranks and earns a place in the Special Investigations Unit.

He is one of a small number of officers whose job is to get Costello.

What his superiors do not know is that he is working for Costello and keeps him one step ahead of the police.

Based, adapted or inspired by but not a remake (according to the director) of the Hong Kong crime thriller Infernal Affairs – this is Scorsese’s masterpiece.

It has Oscars written all over it and if the Academy does not finally reward him with his first ever golden statuette for this then frankly the legendary director should send Nicholson in character after them.

It’s dark, it’s edgy, it’s nail biting for the whole 2 hours and 31 minutes and keeps you guessing throughout as it becomes a race against time for Billy and Colin to uncover the identity of the other in time to save themselves.

Scorsese is back on form in this crime drama, which is beautifully written and tightly directed. The dialogue is razor sharp and surprisingly witty at times but it is an extremely violent film.

It’s not gratuitous and it’s in keeping with the tone and genre of the film.

Produced by Brad Pitt and his film company and boasting a star studded cast – each member delivering a killer performance – even Mark Wahlberg is worthy of praise.

I pity whoever has to decide who to nominate in the supporting actor category because they’ll be spoilt for choice. Nicholson is just a force of nature as the megalomaniac mob boss who is on the edge and losing it slowly.

He dominates the screen in yet another role he was born to play; and DiCaprio and Damon are equally engaging in their edgiest and best performances to date.

This is the best movie so far this year and frankly one not to be missed.