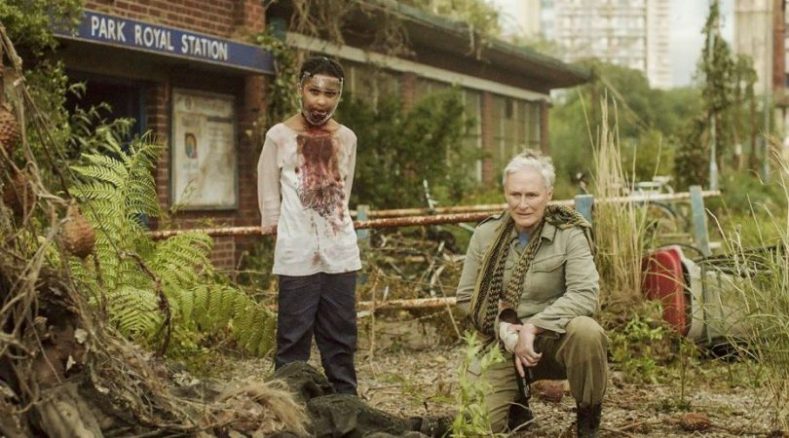 When we first meet the prepubescent Melanie (Sennia Nanua),  she’s waking up in a cell, in Guantanamo Bay-style attire, restrained in a wheelchair by armed soldiers and taken to an underground class-room, full of similarly presented youngsters.

A sympathetic teacher Helen (Gemma Arterton) gets herself in trouble from one of the onlooking soldiers, Sergeant Parks (Paddy Considine), for getting too close to the precocious Melanie, when she impresses her with the warmth of a story she’s written.

Then, disaster strikes. The army base under which Melanie and the others have spent their entire lives is invaded and a small group manages to escape in an armoured truck, to search for safety; the future of humanity rests on the shoulders of Melanie, Helen, Sergeant Parks and the chief scientist on the base, Dr Caldwell (Glenn Close).

OK – so I can’t bite my tongue any longer. Much as I don’t want to give away what could be seen as the first main plot revelation, anyone who’s read screenwriter Mike Carey’s book of the same name or indeed anyone who’s seen the trailer will know exactly who invades the army base. And many cinema-goers who try this, not knowing they’re going to see a zombie film, might feel somewhat cheated.

The Girl With All The Gifts has to be seen against the canon of post-apocalyptic, dystopian zombie productions, on big and small screen alike. In addition to echoing the nihilism of 28 Days Later, World War Z and TV’s The Walking Dead (less so Zombieland and Shaun of the Dead), it stirs up memories of Kevin Macdonald’s low-key civil war drama How I Live Now.

It has its own take on the origin and behaviour of the zombies – a fungal infection that might be able to be fought with a vaccine, creating undead beings that largely rock on the spot in a stupor, unless they can smell live mammals. A little too much explanation is required – much of it from Dr Exposition Close – but the narrative is, unlike the geography, largely consistent, although there are a handful of moments where the logic breaks down. The time-frame also seems unclear – with conflicting signs from different plot points.

The empty London streets – some of them, it seems, being shot by drone over Chernobyl – create an appropriate feeling of alienation and hopelessness but the necessarily meager speaking cast and relatively few locations betray a budget as small as its ambition.

There’s plenty of tension, the action is well handled and the characters – eventually – develop enough chemistry to make most of the relationships feel convincing, although it’s a little narratively convenient, the way this rag-tag group end up on the run together – a kindly teacher, a soldier with a heart, a blinkered scientist and a mysterious girl – with all the gifts, apparently. She certainly has a lot of gifts, but not “all” of them, if she has to wait for the same exposition as we do to find out what’s really going on.

But it has little new to offer the canon and follows another familiar formula – as the main characters meet their demise one-by-one, many viewers will spend their time doing little more than trying to guess who will last the distance and the order in which the unlucky ones will be dispatched. The film takes a journey predictable enough that if you put a bet on who would die and in what order, you’d probably make enough at the bookies to finance a sequel.

Apart from a surprisingly high toll of dilapidated retail franchises, there doesn’t seem to be much of the political subtext that often accompany such films, although there is at least one plot point that could provoke an interesting debate. The only problem is that this is sign-posted several minutes before it happens, so when it arrives, it fails to surprise – but worse, it also makes you wonder why it didn’t happen earlier – except to drag the film out to feature length.