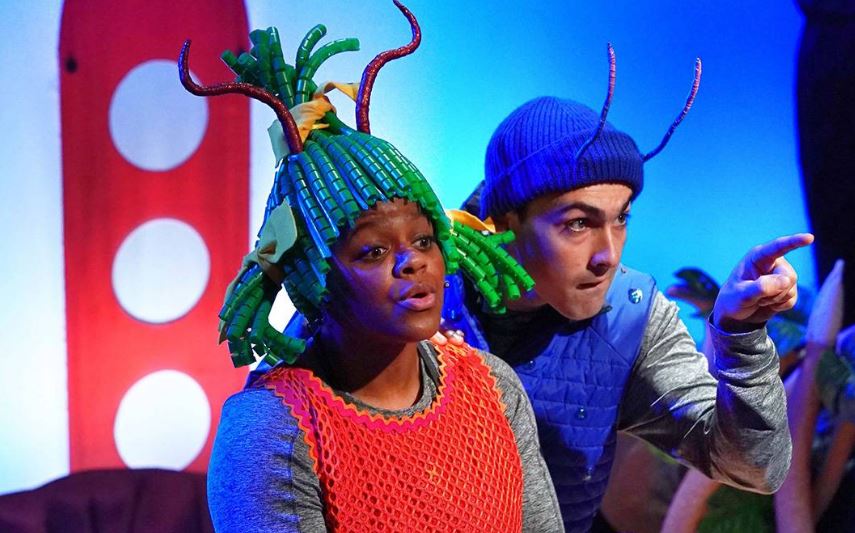 On a distant planet, lived a Smed called Janet (Althea Burey) – on a nearby hill, lived a Smoo called Bill (Dan Armstrong).

One red, one blue, their grandparents are very clear that they’re not to mix – but they do.

When, one day, Bill and Janet disappear, their families have no choice but to come together to help each other find their lost loved ones.

The latest production to come from the adaptation of a Julia Donaldson book, The Smeds And the Smoos is a tale of acceptance, belonging, integration, friendship and unity – a fitting antidote to a divided world.

The book itself is dedicated to the children of Europe, in an apparent swipe at Brexit, but thankfully, no politics spills over into the story.

On paper, it’s not Julia Donaldson’s strongest book and feels a little Dr Seuss’s The Sneetches, with a fairytale romance tacked on.

But somehow, on stage, it blossoms into one of the most entertaining Julia Donaldson adaptations.

Taking a book that takes ten minutes to read and stretching it to an hour is always a challenge, but a handful of catchy songs, some simple audience interaction, a little puppetry and a handful of effective gags that expand authentically on the source material keep it zipping along – for kids and parents alike.

From a set design point of view, the Smoos’ blue rocket is inspired, as it appears from before your eyes like magic and takes you on a magical journey to a colourful and imaginative array of weird and wonderful planets – including our own.

The performances are fun, too – the singing isn’t the best, but in some cases, that’s the point – and the cast of four rise to the occasion as they inhabit the four central roles in the story, a couple of supporting characters and a pair of narrators.

It’s a bright and colourful, inclusive musical, that will entertain the whole family, while naturally and genuinely imparting a gentle and important message, as the Smeds and the Smoos find not only Janet and Bill – but themselves.