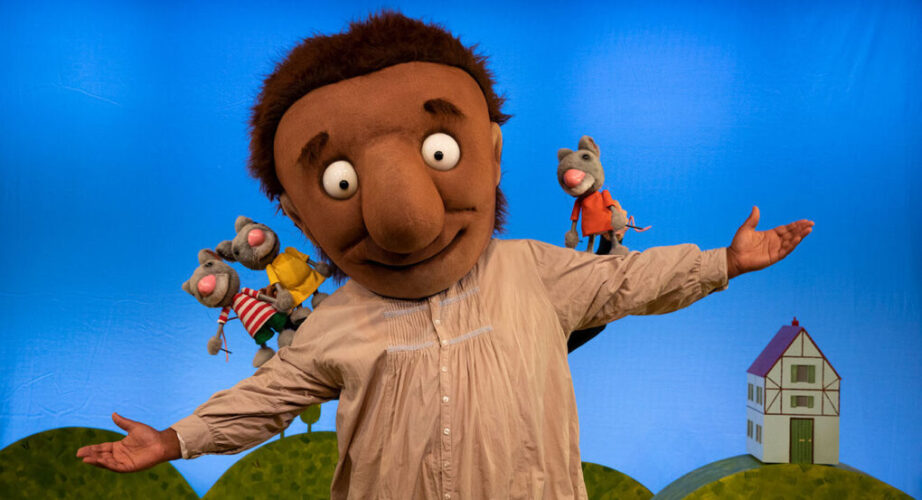 George the giant is the scruffiest giant in town – until he find a shop sells smart clothes in giant sizes.

He’s now the smartest giant in town – but he’s also the kindest giant in town – and on his way home from the shop, he meets a number of animals who are in trouble; a giraffe with a cold neck, a goat whose lost the sail from his boat and a mouse whose house has burnt down, among others.

On each occasion, he comes up with a solution to help the animal – which involves using an item of his smart new clothing.

His kindness results in the smartest giant in town becoming scruffy again, but his instincts for doing the right thing are stronger than his desire to be smart.

The Smartest Giant in Town is the latest book from Julia Donaldson and Axel Scheffler to make it to the stage as a musical. At about 50 minutes, a shade shorter than some of the others, it doesn’t feel quite as substantial as someone of its predecessors – another theatre company, Freckle Productions, actually did a ten minute version as part of a show it called Tiddler and other Terrific Tales.

George is played by a man in a rather large mask, while the other characters are expertly portrayed by puppets, operated by a pair of puppeteers who perform their dialogue and sing their songs and double-up as stage hands, moving the set furniture around between scenes, producing the neatly hidden props.

Anyone who knows the book will be aware that there’s a song, written into the story, that separates each scene – and this is used to good effect as the puppeteers take us from one location to the next.

The staging is particularly clever, with a running joke where each time the giant removes an item of clothing, he “accidentally” drops it, so that when he picks it up, it’s miraculously the size required for that particular part of the story. This is one of the funnier elements that will resonate enough with the parents to allow them to enjoy the show on a separate level from the children.

Perhaps more than some of the early stage adaptations of Julia Donaldson’s books, the audience participation elements depend more on children knowing the books.

And it’s certainly the case that its more reliant than its predecessors on Axel Scheffler’s iconic illustrations; while his Gruffalo, Tabby McTat and the Smeds and Smoos of previous books are often just actors in the kind of costumes you could make at home, with most of these characters appearing as puppets, their portrayal is as faithful to the book as the story itself; while other books have been embellished with back-stories or side-stories to stretch them to an hour, there’s less of that here, but that does leave it a little shorter than some of the others. In fact, the one area where this production goes broader than the source material is perhaps its weakest moment.

One downside of remaining so faithful to Scheffler’s vision is that the giant’s head – while similar to George’s in the book – doesn’t move, which means that whether he’s happy, sad, confused or excited, he’s stuck with the same expression, giving the actor that much more to do to keep the audience on side. Oddly, the puppets themselves seem to be more expressive than the giant himself.

The songs aren’t as memorable as some of the previous adaptations, but the warmth of the message and the strength of the stage design and puppetry make for another enjoyable production that works – at different times – on different levels, ensuring that parents won’t feel left out while the children are having fun.