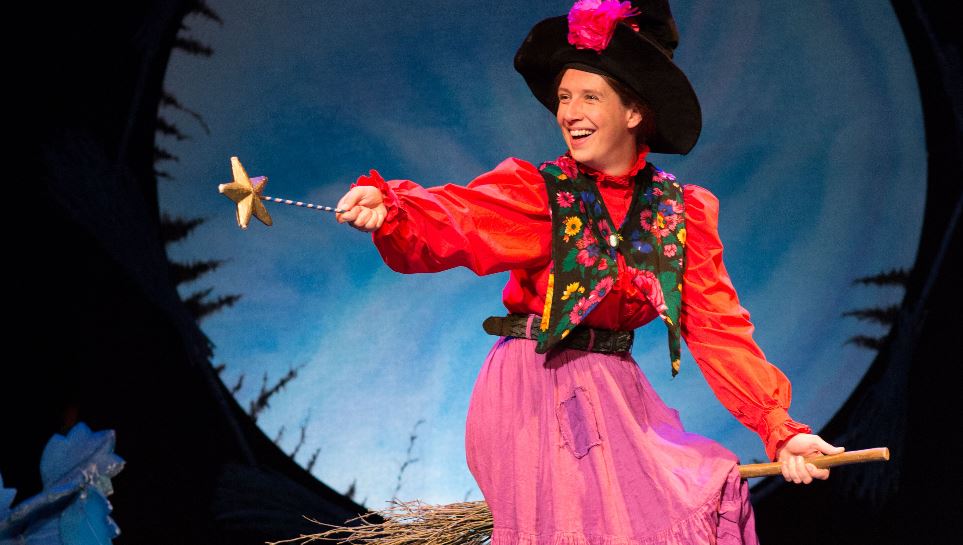 In this stage musical adaptation of Julia Donaldson’s children’s favourite, a kindly witch tries to make room on her broom for all the animals who help her when things go wrong. Against the wishes of her cat.

Over the years, Julia Donaldson – through books such as The Gruffalo, Tabby McTat, Stick Man and Room on the Broom – has built up a following among children and parents alike, for her imaginative tall tales, written with wit, metre and rhyme.

Each of her books takes little more than five minutes to read. One by one, they’re being turned into highly acclaimed animated short films of about half an hour and and handful have also been adapted for stage shows, in the region of an hour.

Stretching a book that takes five minutes to read to fill an hour, without the original text getting lost, is a tough challenge for any production. Here, this is done by embellishing the narrative with a bit of back-story for the characters and adding a few songs, with varying degrees of success.

There’s always a risk that families flocking to see the stage version of Julia Donaldson books they’ve read or films they’ve seen could be disappointed by scenes, plot points or songs that don’t come from the pen of the inspiration for the show. But what would they expect? They’d know how long the book itself is.

Room on the Broom follows a kindly witch and her cat as they carelessly drop this and that from their broom and end up picking up new friends, each time they pop down to look for what they’ve dropped. But framing the familiar story in the context of a group of people seeing a witch fly by while they’re camping doesn’t really seem to fit Donaldson’s world. The extra banter, however, frequently brings previously paper-thin characters to life – and that includes those characters who, on stage, are presented through skilfully choreographed puppetry.

Most of the songs would brighten up anyone’s day – even that of a witch who’s being chased by a dragon – with cheerful music balancing lyrics that largely add to the understanding of the characters and the context of the story.

But while many people choose to go to see musicals because they know they already like the songs, choosing to go to see a Julia Donaldson book adapted to the stage and finding it filled with songs she didn’t write that you’ve never heard before could come as a bit of a surprise and many who love her words might lose them under a magical melee of character development and song-and-dance numbers.

But a likeable cast – led my Amy Harris’s witch, who’d be a welcome children’s entertainer at any party – draw in the young target audience and often invite them to join in the catchy tunes and although few people will have known the songs on the way in, many will be singing them on the way out.

While Julia Donaldson’s book often seems to get lost under the weight of the production, children will recognise the characters and soon catch on, being drawn into a world that’s faithful enough to Donaldson’s and entertaining enough for the children.

It’s an imaginatively designed, bright, cheerful and tuneful piece of children’s theatre. But despite a number of clear attempts to appeal to the parents – such as a reference to a Queen lyric – while this will be a winner for the youngsters, many parents would probably find more satisfaction and enjoyment from reading the book, whether to their children or not. The only magic for the adults will be seeing how much their children are enjoying the show.

I’m a parent, as proud as can be. Is there room on the broom for a parent like me?

Not really, but there’s plenty of room for your son and his friends.