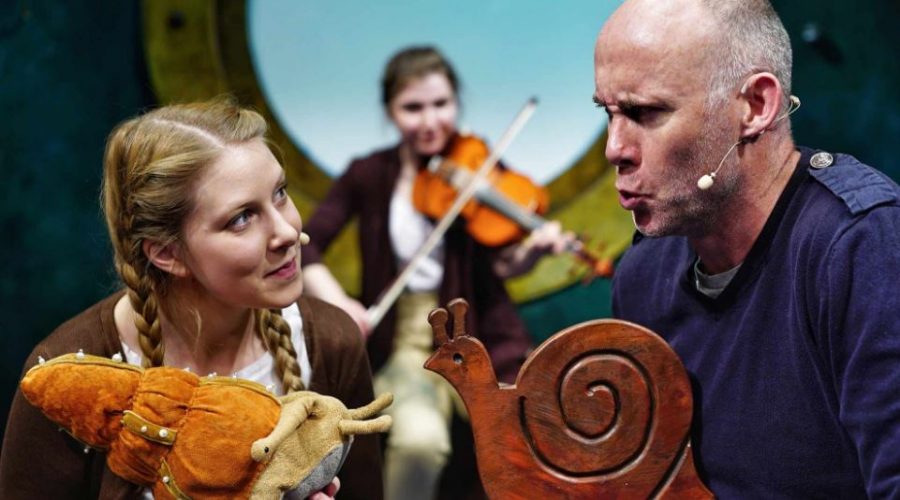 A young girl (Hannah Miller) doesn’t get to see as much of her father (Tim Hibberd from TV’s Topsy & Tim) as she’d like. He’s in the Navy and is often off at sea, so when he’s home, they spend as much of their time as they can reading stories and playing games.

One of their favourite stories is the tale of a tiny snail and a great big, grey-blue humpback whale. The little snail, like the little girl dreams of sailing around the world, seeing amazing places and having amazing adventures.

On one trip away, her father records himself reading the story for her, so that she can enjoy the adventure even while he’s away at sea.

This is the latest children’s picture book – from the imagination of Julia Donaldson – to be turned into a piece of children’s theatre by the Tall Stories company.

The difficulty is always how to turn a book that takes ten minutes to read into an hour-long stage production.

Inevitably, the rhyme and metre of Donaldson’s words get lost in the extra material that has to be added to fill the time. Similarly, many of her lines are repeated – in some cases, it’s satisfying to hear them again but in others, it can feel a little grating.

Intellectually, it’s very cleverly structured and written, with some of Donaldson’s words appropriately put to a sea shanty. The father-daughter relationship will be familiar to all men and children who don’t get to spend enough time with their loved ones, but while it’s emotionally heart-warming, even heart-breaking, somehow it feels a little flat.

Maybe this is down to the young girl being played by a grown-up. It’s perhaps not helped by the fact that in the book, we go on a global journey around the world with the snail and the whale, while this play restricts the action to a young girl’s bedroom. It’s admirable to encourage kids to use their imagination, but it’s almost a shame to crush the sense of adventure that springs from that.

The sea shanty aside, there isn’t as much music in this production as you’d hear in many of the other Julia Donaldson adaptations – and the play could’ve done with a catchy ditty that children and parents alike would’ve been humming on the way home.

But the company certainly manages to strike the right balance when it comes to audience participation. There are plenty of opportunities for children to join in – and get sprayed by the all-important water pistols – always a winner for shows aimed at pre-teens.