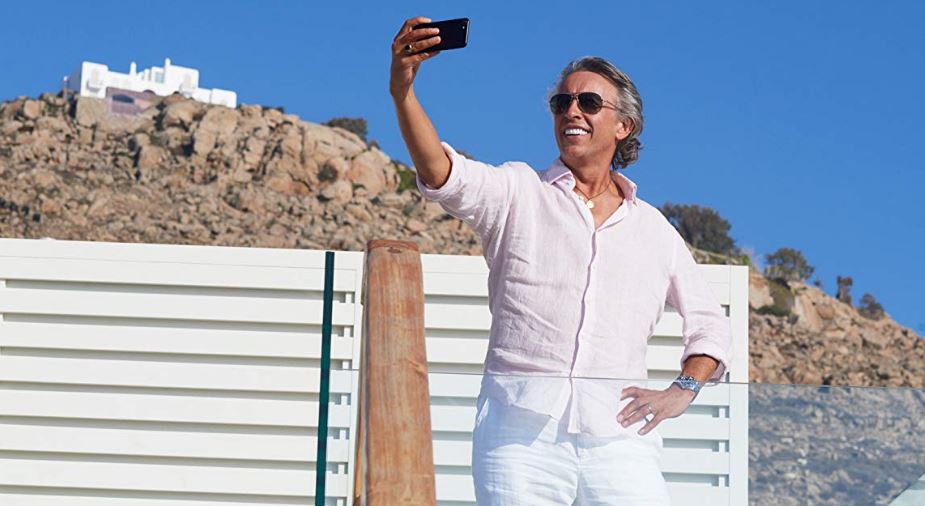 Billionaire retail entrepreneur Sir Richard McCreadie (Steve Coogan) is known variously as “Rich” or “Greedy” by both his friends – and his enemies, of which he has many.

He’s become the king of the high street by screwing everyone and anyone he needs to along the way to get clothes made as cheaply as possible – and if things don’t go so well, he just strips the assets from his business and lets them collapse.

And with his companies owned by his wife, who lives in a tax haven, all his money is safe from the tax-man.

It’s no wonder that MPs – and journalists – are somewhat dubious about his business practices, with parliamentary committees ripping him apart and newspapers not missing an opportunity to berate him on their front pages.

Approaching his 60th birthday, he sees a chance to get a bit of positive press and decides to stage an extravagant party on the Greek island of Mykonos, with celebrity guests, dressed in costumes fitting the theme – his favourite film, Gladiator.

With the central character being a thinly veiled version of Arcadia’s Sir Philip Green, with a bit of Rupert Murdoch thrown in for good measure, the target of Michael Winterbottom and Steve Coogan’s latest collaboration is clear.

Coogan is no stranger to playing grotesque anti-heroes. This is no exception and once again, he manages to sprinkle enough charm on his protagonist for the audience to buy into the story. The complexity of the character is interesting – being ruthless in business but desperate to be loved.

His entourage includes everyone from his adult children and heirs (Asa Butterfield and Sophie Cookson) – to his ex-wife (Isla Fisher) and girlfriend (Shanina Shaik), with his official biographer Nick (David Mitchell) never far away.

Nick is the film’s way of putting the viewers at the heart of the story – digging just a little deeper into what makes Greedy McCreadie tick – but entertaining as he is, it’s never quite clear why he would’ve got the gig in the first place and why – knowing what he knows – he goes along with it.

Some of Nick’s revelations come in flashbacks, which – along with a couple of unlikely side plots and their suitably eccentric protagonists – add variously social commentary and surreal interruptions. Some of these tie together a little too conveniently. Others are flung aside and irrelevant to the story. But with so much going on, you’re bound to hit the target from time to time and there’s a particularly strong moment when the celebrities start pulling out of his birthday extravaganza.

Much of the visual imagery is a little heavy-handed and many of the observations are a little crass, obvious or exaggerated for comic effect – but such exaggeration can damage the message.

The film has interesting things to say about business, families, social injustice but much of what it says get lost, with too many ideas flying around.

Indeed, if you’ve shown adequately during your film, you wouldn’t have to tell at the end, and in a manner similar to The Other Guys, the closing credits are preceded by a set of captions, highlighting what the film-makers see as injustices, such as the pay gap between bosses and their workers – and between men and women, as well as facts about refugees – some of which fit well with the narrative, while others seem incongruous enough to make you feel that they’ve been tagged onto the end of the wrong film.

I’m sure there’s a perfectly worthy message they want to impart, but perhaps it could’ve been done more effectively if they’d stuck to the point and remained focused. Is this a film about financial impropriety, or more precisely immorality – or the mistreatment of refugees? Or is it a satire on reality TV?

is it saying it’s bad to be rich and provide jobs for hundreds, if not thousands of people across the world who might otherwise be unemployed? Is it a warning to billionaires against forcing your staff to dress up as slaves? If it’s saying you should be respectful and responsible, I think we’ve been told that before. Perhaps it’s simply being descriptive, rather than prescriptive?

But with so much going on, it’s almost as if Winterbottom was worried this might be the last film he’d get to make so he had to throw everything he wanted to say about anything into it, just in case.

There’s much to enjoy in Greed is while you’re watching it but despite its best efforts, it won’t stay with you any longer than your Greek suntan.