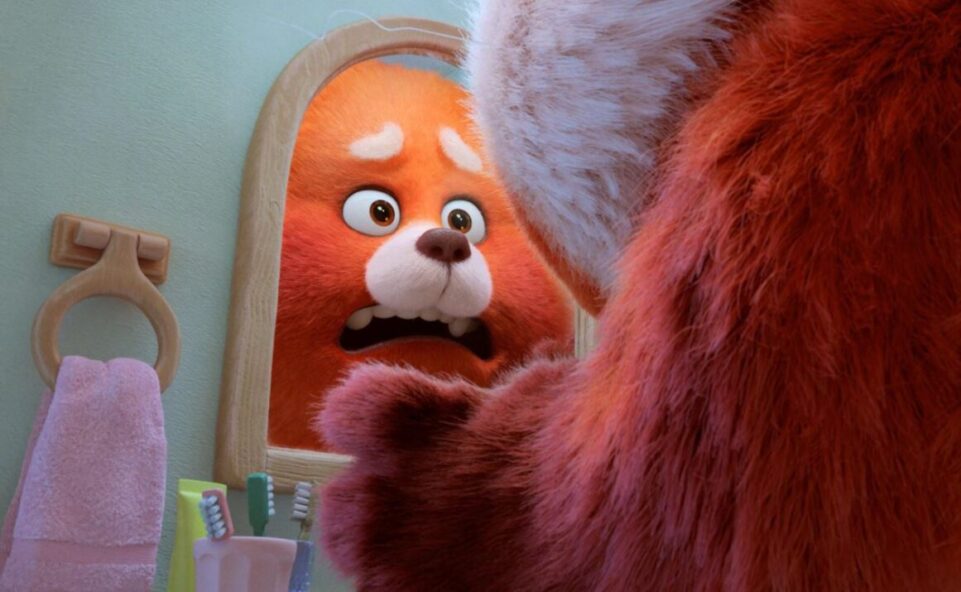 When she’s not having fun with her friends at school, 13 year old Meilin (Rosalie Chiang) helps her mother Ming (Sandra Oh) run the Chinese temple – a popular tourist attraction in Toronto’s Chinatown.

Meilin and her friends can’t contain their excitement when they find out that their favourite boyband is about to do a concert in town, but at $200 (Canadian, don’t worry) per ticket, there’s no way they can afford to go – not that Ming would let Meilin go anyway.

After a particularly stressful experience, Meilin wakes up in the morning and feels distinctly odd – when she looks in the mirror, she sees that she’s turned into a giant red panda. As you do.

This, she finds out, is an experience unique to the women in her family, when they’re in the “red zone” – and the only way to stop it happening is to go through a special ceremony when there’s a Red Moon, which traps the panda inside a talisman.

In the meantime, rather than being ashamed of her inner panda, Meilin realises that she and her friends can use it to their advantage to raise a bit of money to buy some concert tickets.

But when Meilin finds out that her ceremony will clash with the concert, she’s forced to choose between a life of fitting in with family expectations – and an exciting life of being unique.

When 13 year old Meilin first tells her mother that something embarrassing has happened and shuts herself in the bathroom, her mother jumps to a particular conclusion – the wrong one – but an appropriate one for the story that’s about to unfold.

Some critics have described Pixar’s latest animation as a film about menstruation – it’s not. It has a menstruation joke in it, but it’s a coming-of-age film that’s about identity, individuality and acceptance – fairly common themes for films aimed at children and handled with sensitivity and charm, as you’d expect.

It’s not as funny as some of its stable-mates and the back-story requires a little exposition, although it’s easily excused as we can just listen in as Ming explains everything to Meilin.

Unlike most Pixar films, Turning Red is aimed far more at children than at their grown-ups, and most specifically at teenaged girls. Four girls dream of going to see their favourite boy-band in concert. One of them fancies the boy at the local shop. This film is about what it feels like – I imagine – to be a thirteen year old girl, with strict parents, within a traditional community.

It branches out a little more, exploring the notion of children being embarrassed by their parents or falling out with friends in order not to get in trouble – familiar ideas, but never before delivered through the appearance of a giant red panda.

Apart from drawing analogies about what this might really mean, there is little subtext for the adults and unlike most Pixar films, there’s not a wide range of characters, with whom a wide range of viewers might identify. Four girls, their mother, grandmother and aunts. Her father makes a fleeting appearance and the boys are either bullies or objects of affection.

It’s a film made by women, if not for girls, as a response, perhaps, to decades of films made by men that objectify women. Perhaps the big red panda is women setting the record straight.

This is the first time – apart from during the pandemic – that a Pixar feature has gone straight to Disney’s streaming service – where it’s available. It was, it seems, originally destined for the big screen, had it not been for the unpredictability of the Covid restrictions, but more than its predecessors, it’s a film that might sit more comfortably on the small screen.