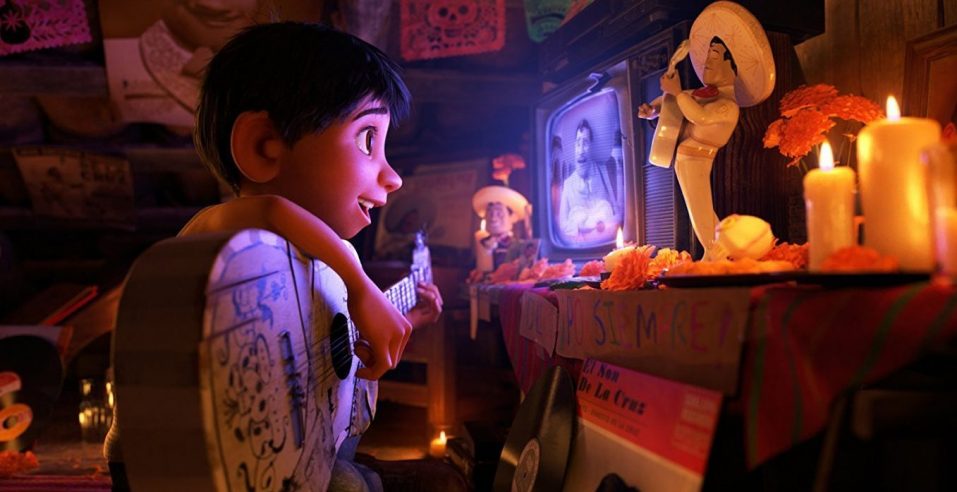 Young Miguel (Anthony Gonzalez) dreams of becoming a famous musician and he hopes to get his big break in a singing contest to mark Mexico’s Day of the Dead, an annual celebration when the dead return to the land of the living to see how their surviving relatives are doing.

But music of all kinds has been banned from his family since his great-great-grandfather left home to make it as a singer, so when his grandmother (Renée Victor) realises what he’s up to, she smashes his guitar.

When Miguel tries to borrow a replacement from the mausoleum of his hero, Ernesto de la Cruz (Benjamin Bratt), he’s unexpectedly transported to the world of the dead.

The only way back to the land of the living is to receive a blessing from your dead relatives, but when Miguel finds his family, Mamá Imelda (Alanna Ubach) refuses to send him home unless he promises to reject music once and for all.

That’s a deal he can’t accept, so he sets off to find his late great-great-grandfather – with the help of a grifter (Gael García Bernal) who needs his assistance to visit his own relatives – hoping that he’ll give him his blessing, while encouraging him to follow him into the world of music.

For a film about death, this latest Pixar gem is bursting with life – the vivid colours and the vibrant sounds of Mexican life – and death – envelop the audience.

Pixar is, of late, picking subject matter which seems well beyond the young minds of its target audience; after Inside Out had, at its heart, psychoanalysis, this time, the subject you’ll be trying to explain to your four year old is what happens when you die.

But somehow, the character-building and story-telling is so efficient that the underlying philosophical questions can be shoved aside, allowing children and adults alike to be enthralled by the wider themes of family, legacy and the power of music.

There are moments where even the most hardened parents might find themselves wiping a secret tear from the corner of an eye and the intricacies of the story often make you switch allegiances and question your own responses. But when the plot starts moving into the realms of murder, many might feel it’s getting a little too dark for younger viewers.

It goes without saying that the animation is remarkable – we wouldn’t expect anything less from Pixar. And for a film about music, the songs are memorable enough.

Whether to engender authenticity or to avoid accusations of Hollywood whitewashing, the cast is almost exclusively Latino – a side-effect of which is that unlike most major studio animations, they can’t use star-power to sell it. The only familiar names in the credits are Gael García Bernal and Benjamin Bratt, and while they are perfectly respectable actors, they – in themselves – are unlikely to draw audiences to a film in which fans won’t even see their faces.

But while the premise is a tough sell and the narrative is a complex web of parallel worlds, in true Pixar style, as unconventional as it is, they push the right buttons, pluck the right heart-strings and deliver the goods with a life-affirming film that will make you grateful for family – and music.