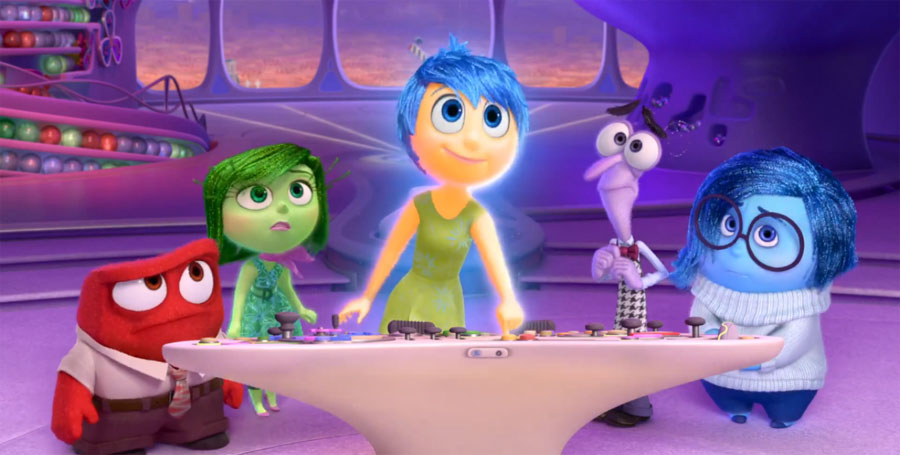 Eleven year old Riley’s (Kaitlyn Dias) world is turned upside down when her father’s new job means that she and her parents have to move to San Francisco.

She’s finding it hard to settle in to her new school and make friends.

Pixar’s latest feature, Inside Out, shows us what’s going on inside Riley’s head, as her emotions battle to keep her good memories to the fore and banish bad memories forever.

Before I start to sound like a grouch, I need to clarify, in advance, that this film is undeniably entertaining and uplifting.

However – and it’s a big “however” – this is far from the peak of Pixar’s remarkable canon.

Before I caught it in Cannes, another reviewer excitedly told me what it was about; inside the mind of an eleven year old girl, characters representing five of her emotions collect her memories and the most important “core memories” are stored in the headquarters while the others are sent into long-term storage and each core memory powers a personality island and …

My mind was beginning to glaze over. I thought he was going to tell me what the film was about, rather than some highly imaginative Pixar version of children’s cod psychology.

What it’s actually about is two characters, a happy one and a sad one, who get lost a long way from home and have adventures as they try to find their way back – and it just so happens that all of this is going on inside the head of an eleven year old girl who’s struggling to get used to moving to a new city.

Like Pete Docter’s earlier masterpiece for Pixar, Up, this film essentially begins with a prologue that sets up the characters and the story that’s to come – but while the beginning of Up will bring all but the toughest cookies to tears, the opening of Inside Out feels like a lecture about how colourful little characters inside your head file away marbles containing your memories, and if you don’t pay attention, you won’t understand what’s going on. A film should not need this much explanation for an audience to understand it. What happened to all the other emotions we have? And there are plenty of inconsistencies in the way that the emotions are portrayed, from one person to another, which seems to undermine the world were being invited into.

It almost feels like an animated documentary about what’s going on inside our heads, except that any child who tries to learn about psychology or neurology from Pixar will be sadly misinformed.

The “outside” story – of a girl missing home and finding it difficult to make friends at her new school – is one that many will identify with and is warmly handled, with Pixar’s typically – almost sickeningly – sympathetic humans, while the “inside” antics are bursting with the frenetic energy you’d expect from the animation studio’s laughter factory.

It’s likely to go over the heads of young children and confuse older ones, who’ll think they’re being told how the brain works, although it seems churlish to criticise a film for trying harder than most to be imaginative – if overly complex – and emotional.

And however the rest of the film makes you feel, it will have the usual Pixar heart-string tugging as the denouement approaches, before pulling out all the punches with a series of end-credit gags.