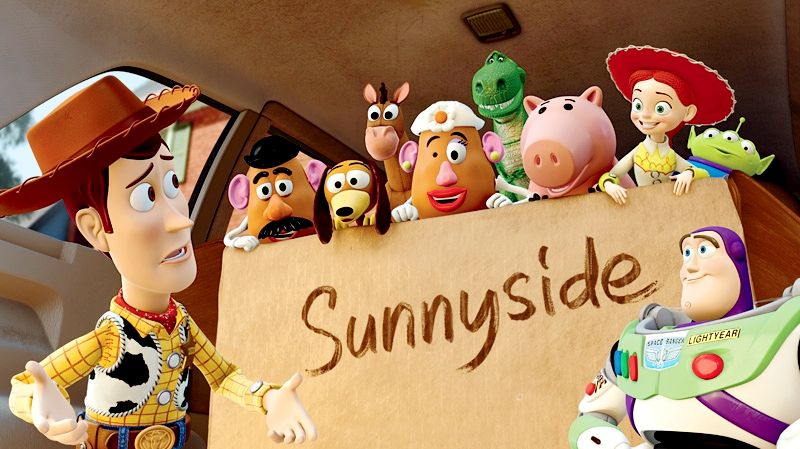 Andy’s toys have been confined to a chest in the corner of his bedroom for years. They’re frustrated that since he’s reached his teens, they’ve hardly been played with – nothing could be worse for a toy.

Or so they thought.

With Andy’s impending departure to college, his mother has come up with a fate worse than being ignored.

She’s told him to sort out his toys into several boxes – one will go with him, another will go into storage in the attic, the next will be donated to the local daycare centre and the rest will be thrown away with the rubbish.

Only cuddly cowboy Woody (Tom Hanks) makes it to the box that Andy plans to take with him, but when he sees the rest being shipped off to the daycare centre by mistake, he escapes from the box and sets out to rescue his friends.

At first glance, the daycare centre looks like heaven – dozens of new children to play with them – but soon, a rivalry builds up between Andy’s toys and the old-timers at the daycare centre, led by a big pink teddy called Lotso (Ned Beatty).

Lotso and his gang get to entertain the well-behaved children, while they subject the newcomers to the chaos and violence of the delinquents from the wrong side of town.

It’s toy against toy and toys against kids – as Woody and his pals scheme their great escape from the torture and detention, to get back to Andy before he sets off to start his adult life.

Pixar has again succeeded in coming up with a highly engaging and highly entertaining film that will appeal equally to children and their parents – and even adults who don’t have children. Oh – and the merchandisers – it’ll appeal to them too.

Some of the top voice talent in the industry keep the familiar characters as warm and fresh as ever, fifteen years after they first took their bow.

The new characters are also, by turn, scary, deceitful, funny and creepy – and in the case of Barbie’s new beau Ken, as complex and confused as any real-life character in recent cinema.

The story is something that everyone can identify with on at least one level – whether it’s about moving on from your childhood, letting go of your children, forming new friendships or honouring old ones.

Some of the more adult themes are addressed with a degree of simplicity which wouldn’t pass muster in a live-action film, but for what it sets out to do, it’s hard to fault this.

It’s available in 3D and Imax, but while the 3D is subtle and effective, it’s not particularly necessary to invest in the goggles to improve the experience – this is one of those films that goes straight for your heart – and warms it.