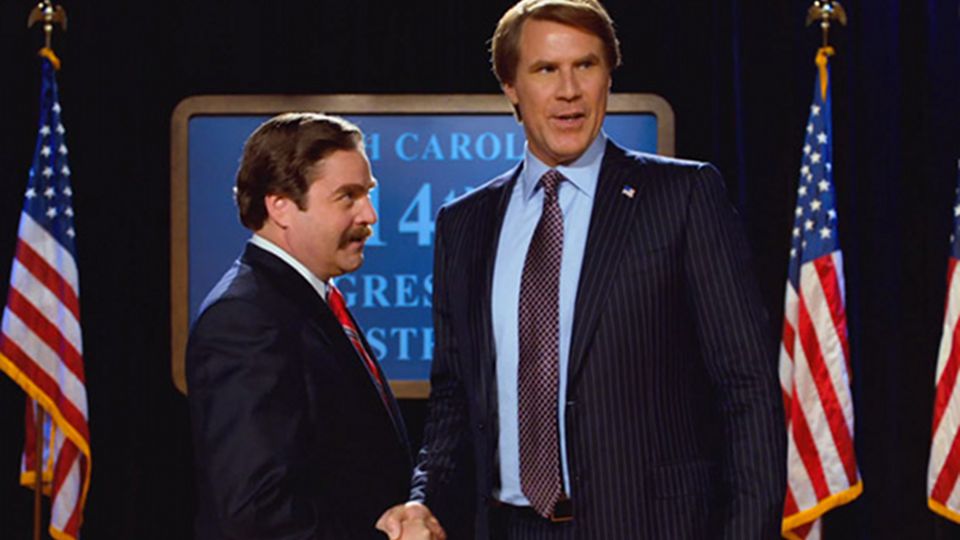 North Carolina Congressman Cam Brady (Will Ferrell) is standing unopposed for re-election in his district, but after a series of sexual indiscretions, his big money financial backers are worried about remaining associated with him.

The Motch brothers (John Lithgow and Dan Aykroyd) are looking for another candidate to back – and, of course, manipulate for their own ends – and they select Marty Huggins (Zack Galifianakis), the local tour guide and son of a wealthy businessman (Brian Cox).

It takes a lot to mould no-hoper Marty into an electable prospect and he receives a baptism of fire as Cam’s experienced campaigner, drags him through the coals of dirty politics.

Whether they’re chasing photos with babies, digging up dirt on each other’s personal lives or trying to get each other in trouble with the law – the campaign for the 14th Congressional District is never short of headline grabbing.

In the days of The Thick of It, anything skirting around the subject of political satire has a lot to live up to; Jay Roach’s own Game Change has recently cleaned up in the TV movie category at the Emmys but while his latest feature, The Campaign, certainly dips its toe in the same pool, it’s not truly aiming for satire.

There is much humour to enjoy, but very little that requires any intelligent thought. It would not be pushing it too far to say that this film contains a couple of the biggest laughs anyone is likely to experience at the cinema this year – but they’re not at the expense of the political system, rather, the film-makers are following the oft-traveled path of the underdog-coming-good or the duck-out-of-water.

Will Ferrell and Zach Galifianakis are highly entertaining, but – perhaps in attempting to set their style of humour within the serious context of an election campaign – apart from a handful of shining moments, the film falls short of their usual standards.

Even before Game Change, Roach explored the peculiarities of the American political system in another award-winning TV drama, Recount, about what was seen – in US Democratic circles – as George Bush’s stolen election, so he clearly knows the subject – but by going for laughs over substance, he delivers a film which disappoints and feels like it misses the opportunity to stimulate debate in the run-up to another presidential election.

Alexander Payne’s early film, Election, effectively balanced a darker comedy with the machinations of political manoeuvring – in the context of a student body election – but much of the humour in this area comes from the bitterness of the campaign, while in this film, the acidity of comment is passed over for the comic broad-brush of stereotypes – such as manipulative money-men and infidelity.

Roach seems to have left his intelligence on the small screen and delivered little more than an entertaining romp through a bunch of North Carolina losers. The characters are just that bit too broad to make us fear politics.