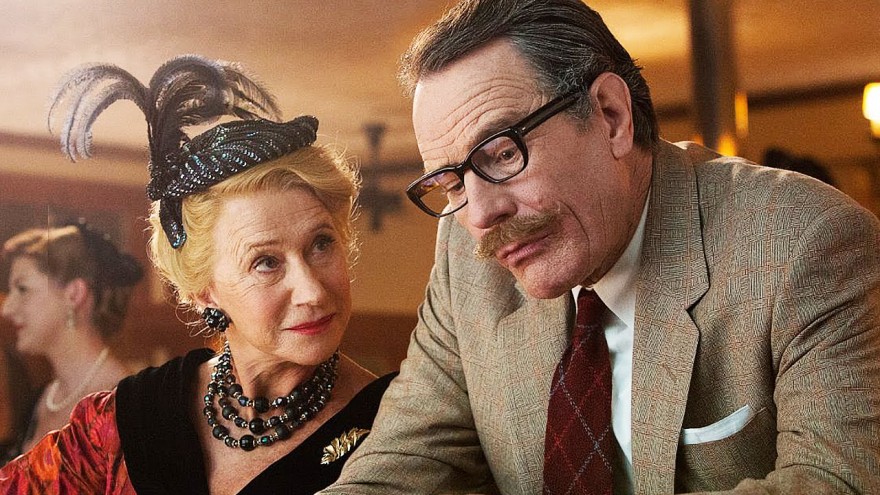 By 1947, Dalton Trumbo (Bryan Cranston) is the most in-demand screenwriter in Hollywood, but he doesn’t keep his political leanings secret. He’s a member of America’s communist party, and while it’s only a couple of years since the Russians helped the US defeat the Nazis, the American establishment is already shutting the door on left-wing politics.

It’s only a matter of time before Trumbo and nine fellow writers – known as the Hollywood Ten – are summoned before the House Un-American Activities Committee, to be accused of using their screenplays to spread Communist propaganda to the masses.

The group don’t admit to the allegations against them, but their refusal to answer the questions put to them sees them jailed, instead, for contempt. Their names are also added to the blacklist that stops them from working in Hollywood. Or so the committee thinks.

Soon after coming out of prison, Trumbo gets his friend and fellow writer Ian McLellan Hunter (Alan Tudyk) to put his name on a screenplay that goes on to win an Oscar. Later, he strikes a deal with low-budget producing brothers Frank (John Goodman) and Hymie King (Stephen Root), who suddenly start churning out decent films – with a whole variety of unknown names on their scripts. One film is so decent, another Oscar is collected, on his behalf, with the Academy having no idea it’s come from a blacklisted writer.

And even as the influential conservative columnist and commentator Hedda Hopper (Helen Mirren) is doing her best to ensure that the blacklist is upheld and those trying to work around it are exposed, some of the biggest names in Hollywood are secretly striking deals for Trumbo to write major movies for them, further undermining a discredited system which, astonishingly, lasted another fifteen years, after his secret was revealed.

Hollywood loves making films about itself but when the story covers such an intriguing and important period in its own history, it has to get it right.

It’s certainly got the casting right, with the exuberant central character portrayed as an eccentric, workaholic ego-maniac who knows how talented he is but refuses to be silenced, by the ever-impressive Bryan Cranston – complete with his cigarette holder, a typewriter in the bath and a moustache as big as his ego. Dame Helen Mirren is necessarily slimey as Trumbo’s nemesis, while John Goodman and Stephen Root delight as B-movie producers who can’t believe their luck and Louis CK is an effective straight-man as an honourable man who believes he’s defying the establishment for the right reasons. Michael Stuhlbarg, as the conflicted actor Edward G Robinson, neatly portrays how many during the McCarthy-era wrestled with their conscience as they considered whether to name others in order to protect themselves.

The irony of a business built on ideas silencing anyone whose ideas didn’t fit with its own – or more accurately, those of a Congressional committee – is not lost, in this depiction of a period of American history that betrays the country’s battle with its own First Amendment, that’s meant to guarantee freedom of speech.

But the two sides are portrayed rather too simplistically, with no attempt to explain why some Americans felt so comfortable with Communism (apart from the suggestion that communism means simply being prepared to share your sandwich with someone less fortunate than you) and Hedda Hopper and her ilk being inexplicably presented as being as authoritarian as those whose views they were trying to suppress.

Nothing – and certainly not the blacklist – is ever that black and white and a film that depicts the folly of trying to police ideas does a disservice to its viewers if it doesn’t try to explore the battle of ideas at its heart.

In fact, apart from a fleeting glimpse of Trumbo addressing a group of strikers (a little light socialism, rather than hard-line communism), the only time we see any of the communist-sympathisers campaigning, rather than pontificating in the comfort of the drawing room, they’re calling for freedom of speech, rather than espousing left-wing politics. This is, perhaps, because the film-makers know that if modern-day middle-America was told exactly what the Hollywood Ten were fighting for, they’d probably support Hopper and the Committee.

At its best, the film highlights the farcical nature of how such a fearsome spectre as the McCarthy witch-hunts could be undermined to such an extent that one writer managed to win two Oscars while on the black-list, but by failing to address the fundamental issues, the broad brush smudges the details of history and paints over much of the drama.

If Trumbo sets out to be a bit of self-flagellation for Hollywood’s treatment of left-leaning artists, it ends up patting itself on the back for acknowledging its mistake – although we don’t see any of the antagonists do this; it’s left to a coda, with Trumbo addressing fellow writers some years later.

This is a film that had to be made – but perhaps not quite the film that should have been made.