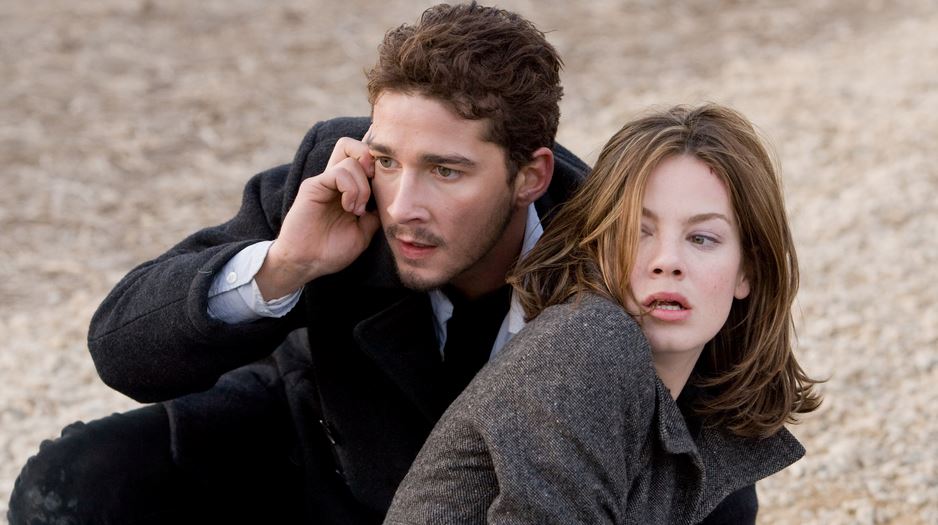 Jerry (Shia LaBeouf) is a bit of a waster. He’s the black sheep of the family, having quit Stanford and moved out of town to work in a copy shop.

The shining light of the family is Jerry’s identical twin, Ethan, who has risen up the military’s ranks – but with such responsibility comes danger and as the film begins, Jerry is called back to his estranged family’s home for Ethan’s funeral.

Shaking off another attempt to get him back to Stanford, Jerry returns home…to find his flat full of explosives and military equipment. While he’s contemplating this inexplicable discovery, his mobile rings and an unidentified woman tells him that the FBI are about to arrest him on suspicion of terrorism and he has thirty seconds to escape.

Meanwhile, over the other side of town, single mum Rachel (Michelle Monaghan) has just put her young son on a bus to play his trumpet in the school band at the State of the Union address in Washington. She’s enjoying a rowdy drink with a bunch of girlfriends when her mobile rings. It’s the same unidentified woman, ordering her to go out to a car, parked around the corner. If she doesn’t follow the instructions, she’s told, her son will die.

You’ll have worked out already that Jerry and Rachel will be thrown together in a web of intrigue, confusion, action and high-tech adventure, that involves – obviously (I did mention the State of the Union, remember) – an attempt to attack some senior politicians.

Tackling some terribly topical subjects – such as total surveillance and bugging everyone’s phones and emails – this has something interesting to say about where the world is going.

But wrapping it up in one of the most ridiculously illogical and incoherent plots of the decade rather detracts from the message.

One of the problems with this kind of film is that once it becomes clear what’s actually going on, you realise it’s been done far better before.

The loose direction of this loud movie feels so formulaic, alternating crazy chase scenes with a handful of scenes of quiet contemplation, and while it tries to frighten us with its dark vision of the future, much of what it presents us with already happens and what’s left is such a leap from reality that it doesn’t ring true – not in a modern-day setting, at least.

The main characters remain blank canvases throughout the film, so you gain nothing from investing in them and too many of the supporting characters – Billy Bob Thornton’s, for example – start off as if they’re going to have something interesting to say or do, but then blend into the background, with nothing original to offer.

It also seems to be a rather odd choice to be blown up to the IMAX format, since it doesn’t seem to be – in any way – grand enough to warrant that honour.

IMAX should be careful who they work with, lest they demean their impressive experience with fodder that pretends it wants to make you think but would really rather make you sit on the edge of your seat for a while and then frown when it turns out to be much less exciting than advertised.