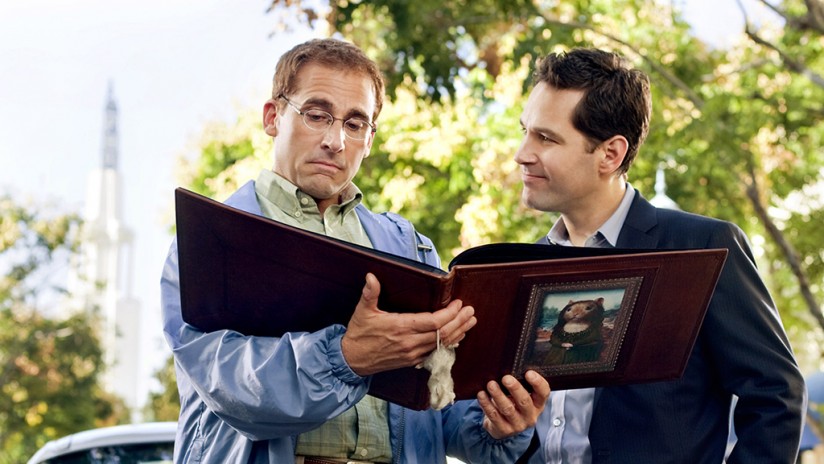 When ruthless investment company boss Lance (Bruce Greenwood) sacks one of his underlings, the ambitious Tim (Paul Rudd) sees it as his chance to get off the sixth floor.

He pitches an idea to secure the business of an eccentric Swiss billionaire Müeller (David Walliams), much to the frustration of the brown-nosing Caldwell (Ron Livingston).

Lance decides to give Tim a chance to impress him at his regular “Dinner for Schmucks” where each guest has to bring an idiot everyone else can laugh at.

Desperate to attend but having no idiots to take, Tim is oddly fortunate enough to run over the naïve taxidermist Barry (Steve Carell), while he’s picking up a dead mouse from the street to add to one of his installations.

Tim soon finds Barry trailing him like his shadow, causing increasing havoc in his life – not least unintentionally and unknowingly pushing his disapproving girlfriend Julie (Stephanie Szostak) into the arms of her performance artist client Kieran (Flight of the Conchord’s Jemaine Clement).

The only saving grace is that Barry might just make the perfect idiot to impress Lance and get him that promotion, but with his rivals bringing the likes of a blind swordsman, a vulture wrangler and a taxman with the power of mind control (and a vendetta against Barry), the scene is set for a dinner you won’t forget.

But with so many strands, it doesn’t hold together comfortably.

That said, this is an unexpectedly funny film and you’ll be surprised at how much you laugh – not because it’s in any way well conceived, funny or clever, but because of Steve Carell’s winning natural abilities as a comic.

It fare more entertaining that it deserves to be, but at the same time, the plot was so contrived and unconvincing that it quickly becomes irritating.

No-one or nothing in the film feels real. Despite his necessarily irritating qualities – which, in fact, decrease as the film reaches its denouement – Carell aside, every last character lacks any empathetic qualities.

It’s not entirely clear whether we’re meant to be identifying with Rudd’s Tim or getting the deeper message that it’s actually his idiocy that’s being shown up by the inherent wisdom of the butt of his jokes.

The latter surely rules out the former, because Tim is a selfish user who is truly far more of an idiot than the mouse-taxidermist he publically mocks in the hope of securing a promotion.

OK, so most of the unflattering situations he finds himself in are not of his doing, but it’s difficult, as a viewer, to root for someone who’s one goal in life is to collect as much cash as he can as he climbs over small people on his way up the greasy poll.

OK, so he feels a bit bad about it – and so he should.

But the only reason we don’t urge his long-suffering girlfriend to run off with the artist (the welcome and hilarious, if incongruous big-screen introduction of Clement) is because his character is so surreally creepy that he rarely gets more pleasure than when he’s dressing up as a goat.

Carell’s warmth, innocence and put-upon charm will have you cheering for him as he’s squeezed between the big-business brats on the one side and his mind-controlling tax-collecting nemesis.

This is narratively a poor and unpleasant film, with nothing to recommend for Rudd and the wasted Livingston and Greenwood, but there’s much in it to delight fans of Carell and Clement.