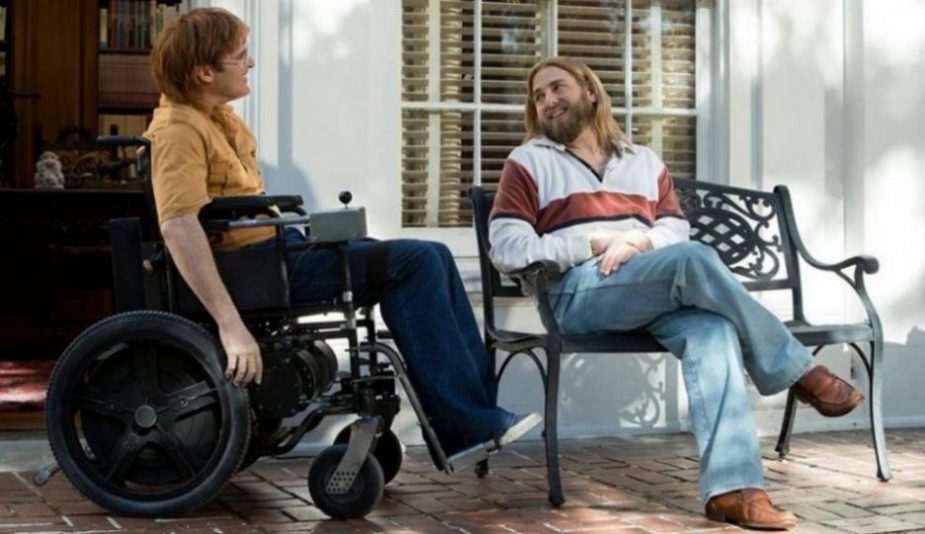 Abused as a child, John Callahan (Joaquin Phoenix) turned to drink as a teenager and by his early 20s is good for very little.

At a party one night, he can’t resist the invitation from another guest, Dexter (Jack Black), to leave the party and spend the evening drinking and trying to find hot women elsewhere.

Neither of them is in any fit condition to attract a woman, but drinking they can manage – and by the time they get back into the car at the end of the night, with Dexter at the wheel, they’re so hammered that they both fall asleep.

When the car ends up on its roof, Dexter escapes with scratches, but John is left paralysed from the chest down.

Deciding to turn his life around, he signs up to an Alcoholics Anonymous group led by Donny (Jonah Hill) and becomes a newspaper cartoonist, as a way to vent his frustration at the world around him.

There’s much to admire about Gus Van Sant’s low-key drama – his pithy script is fun and Joaquin Phoenix and an almost unrecognisable Jonah Hill turn in entertaining performances.

But the direction is a little confusing – not least by playing around with the timeline in such a way that it’s not always clear where we are – and the biggest problem is that the narrative just doesn’t really go anywhere.

An alcoholic is paralysed in road accident – he joins AA, becomes a cartoonist and – well – that’s it.

We don’t get a sense that he’s particularly moved on as a person – it’s not even clear whether he’s beaten his addiction.

Most of the supporting characters exist for no purpose other than to nudge the narrative along and they feel like they’re from central casting – a gay, black man, an older woman, an immigrant, an overweight woman, a stoner carer – aside from Hill’s Donny, only Jack Black’s Dexter has the potential for engaging the audience and – potentially – his journey has been more dramatic than John’s, but this film is based on John’s memoirs, so it’s his not particularly interesting or original story that we follow.

His cartoons often raise a smile – the title of the film and the memoir it’s based on is the caption from one of them, featuring an empty wheelchair, tipped over on the floor. These observations are often more witty, memorable and rewarding than the pontificating and expositional story-telling of the script.

The late John Callahan had more to say in his cartoons than he did in his memoirs.