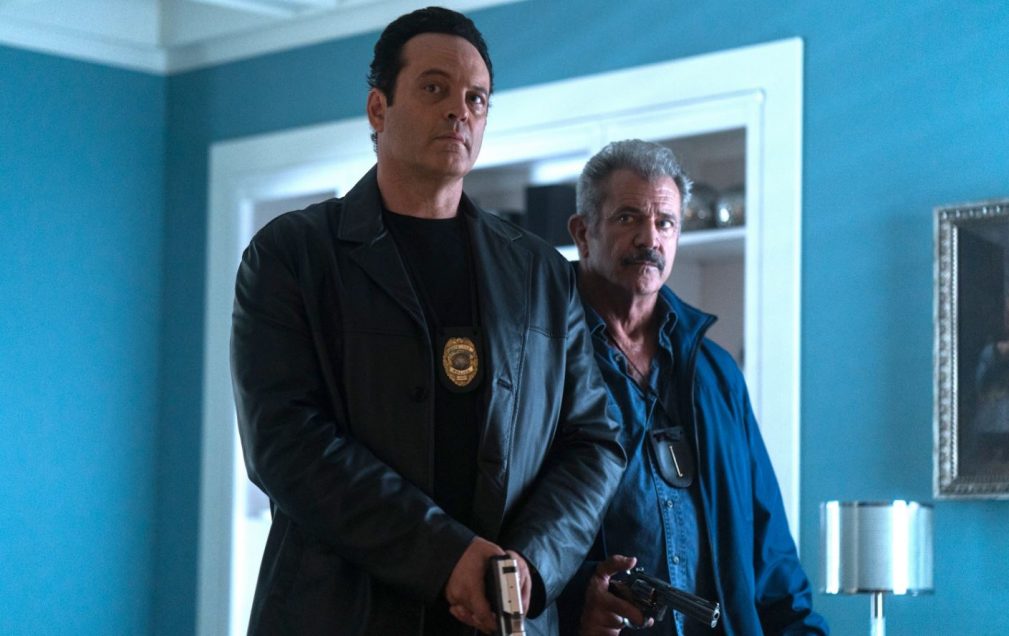 When a video emerges of tough-guy cops Ridgeman (Mel Gibson) and Lurasetti (Vince Vaughn) being a little too tough on a Latino suspect, they’re suspended until the row blows over.

But with a disabled wife at home and neighbourhood kids bullying his daughter, Ridgeman can’t afford to be without his salary; he gets a tip from an underworld contact that he thinks could be a way to earn an easy buck in the meantime.

He persuades Lurasetti to join him in a stake-out of a well-known criminal, Vogelmann (Thomas Kretschmann), who’s planning a job, with the intention of moving in to relieve him of his ill-gotten gains.

But by the time they found out what Vogelmann is actually planning to do, the stakes are far higher than they’d anticipated – but there’s no going back.

Director S Craig Zahler is the master of understatement – delivering us an opening scene that doesn’t have the explosive nature that you might expect to warrant a suspension, taking far too long to get going – being more interested in developing characters than diving into the action, and avoiding incidental music throughout, except in the background on a car radio.

Taking its title from an expression that police use to mean that your career is going nowhere, when the pair are suspended, their boss (Don Johnson) reminds Mel Gibson’s Ridgeman that in the decades that he’s carried the badge, he’s failed to modernise his attitudes or adapt to new technologies. The film itself is similarly unapologetic in its portrayal of its characters and its lack of interest in modern technology.

Dragged Across Concrete is a blunt and no-nonsense thriller, a shameless homage to exploitation B-movies, efficient, effective and convincing – until about three quarters of the way in, when the plot stars to unravel and feel a little less likely.

But even as the film’s plot – like Ridgeman’s plot – starts to spin somewhat out of control, it remains an entertaining ride.

Despite the obvious failings of our morally ambivalent anti-heroes, the hard-hitting cops at its heart elicit the sympathy required to have you on their side – although that might be as much due to the unadulterated, ruthless brutality of Vogelmann and his gang.

There are supporting characters who are given far too much importance and others who take over the show and while much of the narrative feels familiar and formulaic, there are plenty of beats that will throw you off guard – not least an unexpected final face-off.

It pushes boundaries, without feeling particularly fresh, and takes far too long to reach its conclusion, and with a number of scenes where gritty is eschewed in favour of stomach-churning, you might conclude that Zahler is not a master of understatement after all.

But when it works – it really works.