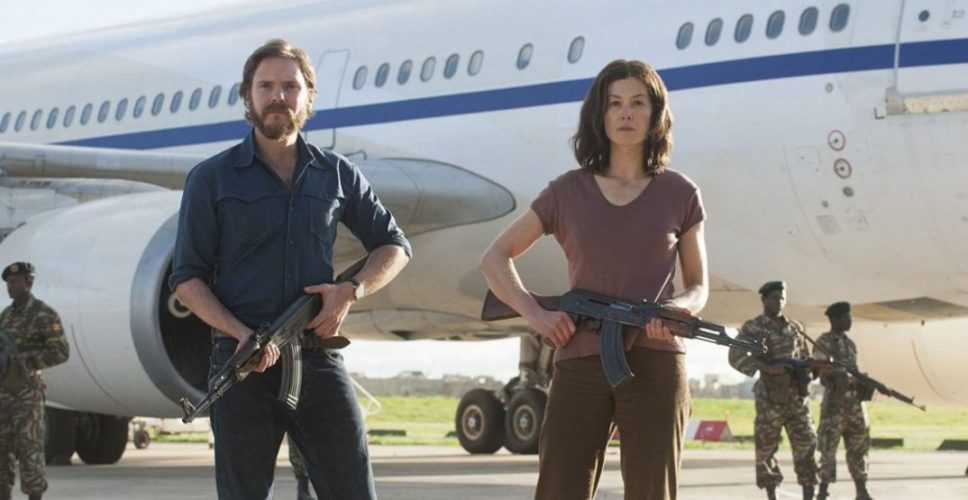 It’s 1976. An Air France passenger jet has just refueled at Athens on its way from Tel Aviv back to Paris.

German armed hijackers Wilfried (Daniel Brühl) and Brigitte (Rosamund Pike) and two Palestinian comrades suddenly jump up from their seats, round-up all the passengers in the rear cabin and force the pilots to fly to Entebbe in Uganda, where the publicity-seeking and power-hungry dictator Idi Amin (Nonso Anozie) has set aside an old airport terminal to help his friends in the Popular Front for the Liberation of Palestine.

With most of the passengers being from Israel, it falls on the Israeli prime minister Yitzhak Rabin (Lior Ashkenazi) to deal with the crisis.

When the hijackers start separating out the Jewish passengers and warning that they’ll start killing the children first, Rabin decides to break with tradition and negotiate with them.

But his Defence Minister Shimon Peres (Eddie Marsan) doesn’t want to give in; with his military leaders, he proposes a daring raid on the airport to try to free the hostages.

This was one of the most audacious military victories in Israel’s decades-long military struggle against the Palestinians and their supporters.

This film does its best to examine what drives not just the Palestinians, whose homes and families have been destroyed by the conflict but the Western revolutionaries who sign up to help them.

There are interesting moments when the Germans see the Palestinians start rounding up the Jews and they insist that Germans can’t be seen to be singling out Jews again, just thirty years after the Holocaust, but while they were the face of this hijacking, the Popular Front for the Liberation of Palestine – or at least an off-shoot thereof – was pulling the strings.

On the Israeli side, too, there are interesting debates, as Rabin insists that peace can be reached only through negotiation, while Peres tries to persuade Rabin not to negotiate with a proverbial gun to his head.

History, of course, tells us that while Peres got his way on this occasion, despite his success, he eventually became a dove, while Rabin – who would later begin a true peace process with the Palestinians would eventually be assassinated – not by the enemy without but the enemy within – a hardline extremist Jew.

In the same way that the motives of the Palestinians in this operation are laid bare – to avenge their relatives – we also learn, perhaps, what led to Israel’s current prime minister, Benjamin Netanyahu, to reach his firm position on the crisis.

But while the film explores some interesting and important ideas and is also successful at ratcheting up the tension, both in terms of the hostages and the Israeli commandos preparing to rescue them, there is a somewhat astonishing misstep in the telling of this story.

It begins with a rather peculiar modern dance rehearsal – which makes sense when we learn that one of the dancers is dating one of the Israeli soldiers.

But it’s unforgivable that just when the raid begins – just when the story has finally built up to the scene that anyone choosing to see this film wants to see – the director cuts away from the action to show us the modern dance recital – the same one we’ve already seen being rehearsed on a number of occasions anyway.

The drumming to which they are dancing works as an effective increasing heart-beat on the soundtrack as the adrenaline builds and the preparations lead to what we all know is coming – but cutting away from the whole point of the film to show us a dance routine beggars belief. Who on earth thought that was a good idea?

It’s a hugely disappointing, inexplicable, unnecessary and inexcusable decision that throws out any goodwill previously built up in the audience – you go to see Entebbe to watch the rescue of innocent civilians facing certain death, hundreds of miles from home – not to see dancers throwing themselves – and their clothes – onto the floor.