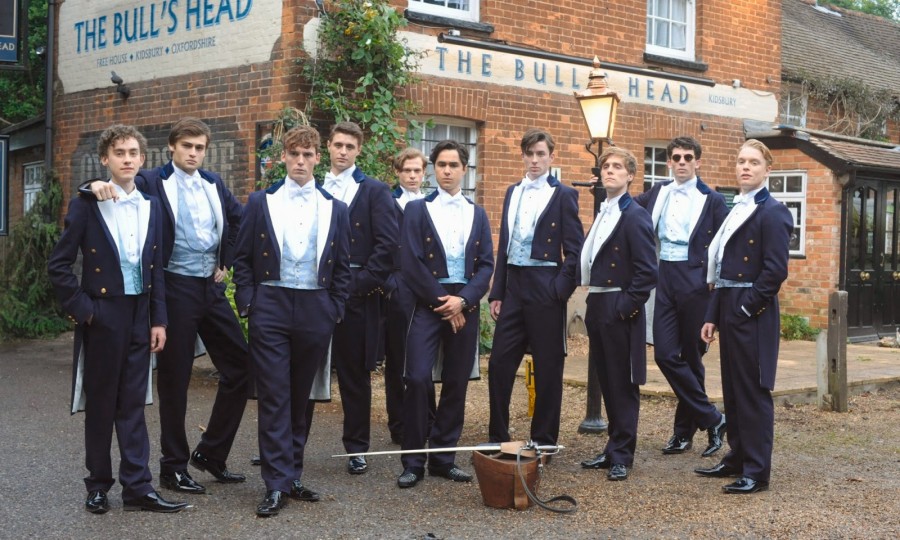 It’s the beginning of the year at Oxford University and the members of the exclusive Riot Club need to find two recruits from among the freshers to bring their secret organisation up to quorum.

Alistair (Sam Claflin) seems like an obvious choice – his older brother was a former club president, after all. The other potential member lined up is posh boy Miles (Max Irons).

Alistair is a sniveling rich kid who sees the working classes as a drain on society, while Miles is so liberal that he’s even dating a girl from the north of England.

The pair are welcomed into the fold in time for the annual dinner, famed for the debauchery associated with it. They hire back room in a pub out of town and turn up in their tails, for a night of fine food, enough alcohol for an entire city and plenty of monstrously bad behaviour.

But when the fun takes an unexpectedly dark turn, the loyalty of the members is put to the test; will they put their own reputations on the line to protect the infamous club or is it each man for himself?

An adaptation of the suitably named stage-play Posh, The Riot Club is clearly a nod to the similarly infamous Bullingdon Club, which counts some of the most influential people in the country among its former members.

On one level, the film is a political satire on how the old-boys’ network supports its own and propels them to high office, where they can keep an eye out for the next generation.

On another level, it’s a thoroughly misogynistic booze-fueled youth drama. The film might be misogynistic, but only because the club itself is all-male and its members think of little that’s outside their pants once they start drinking.

With a delightfully smooth cameo from Tom Hollander as an former club member who can fix anything for anyone, the political satire is the more successful element of the film, although it’s by far the smaller in narrative terms.

The student drama is less convincing. As the club members point out, they have 20,000 students to choose from, yet their search for two recruits appears to involve stopping the first two people they meet. Conveniently, one is a good guy – the only character most viewers would even want to share a drink with – and the other is evil incarnate. Of the others, a handful are moderately interesting characters, but most of the others are just there to make up the numbers.

In case you didn’t get the message from last week’s Ben Schnetzer film Pride, the Tories are scum and socially aware liberals are angels, so obviously, we’re invited to root for Max Irons. But if the club was really as advertised, would he even have made the grade in the first place?

We’ve all heard stories of our current political leaders and their debauched club activities, but when this film suggests that it’s little more than an exuberant annual dinner at which they trash the place and offer to pay for the repairs, it almost leaves you with the impression that they’re not that different from any other students who get a bit drunk and cause a bit of damage – the main difference being that these guys can afford to pay for the repairs – and do. Apart from the twist – that’s as unexpected to the club members themselves as to us – their behaviour is no worse than we see in American frat-boy comedies, but at least they dress better.

It’s hard to work out who the audience might be for this film – with a cast bursting with pretty young boys, its treatment of women might keep girls away from cinemas, while young lads would rather be out getting pissed themselves than watching some posh toffs getting tipsy. And certainly very few adults would be drawn in by the plot, other than angry socialists who want to use it as proof that the Conservative party is unfit to govern.

But which adults have never done anything in their youth that they might not be so proud of? And which club wouldn’t expect its former members to give them a leg up later in life? Few people scream scandal when former union officials climb their way to the top of Labour governments. And while the majority of the Riot Club members might truthfully be portrayed as being loathsome characters with no respect for the working classes, a comparable gathering on the fringes of the Labour Party conference in Manchester this wee might be similarly dismissive of the governing elite.

At its best, The Riot Club is a slick, well-acted drama that has some interesting things to say about old-boy networks and loyalty, but it has little fresh to say about student life, its politics are clumsily simplistic and it’s likely to alienate almost any possible audience.

Denmark’s Lone Scherfig was considerably more successful, profound, subtle and nuanced with her 2009 exploration of English student life and the class system, An Education.