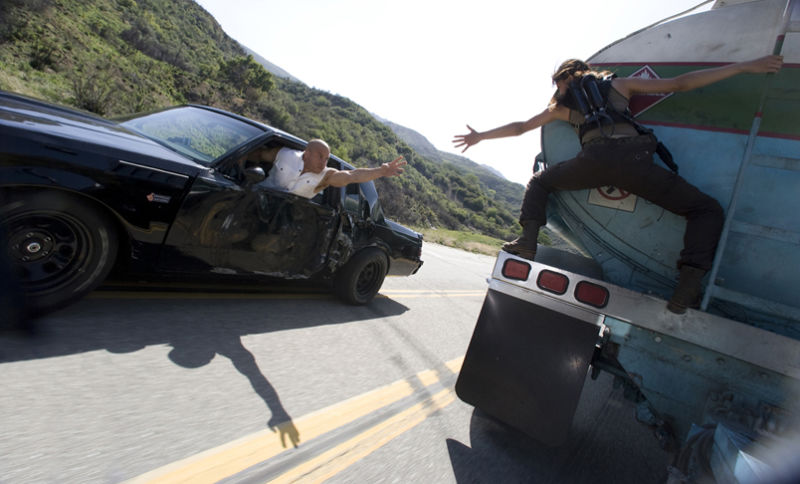 Dominic Toretto (Vin Diesel) has rejoined his gang of speeding, 21st Century highwaymen, stealing thousands of dollars worth of fuel (Diesel?!) from high-speed tankers in the most impossible ways.

But when his girlfriend Letty (Michelle Rodriguez) is murdered by members of a rival criminal gang, he throws all caution to the wind and sets out for revenge.

As luck would have it, FBI agent Brian O’Connor (Paul Walker) is after leaders of the same gang.

Soon, Toretto and O’Connor find themselves racing souped up dragsters around the streets, in the hope of getting close enough to the ruthless gang bosses Campos (John Ortiz) and Fenix (Laz Alonso).

After sitting out F&F 2&3, Vin Diesel returns for the fourth instalment of the action franchise that does exactly what it says on the tin – it’s fast and it’s furious. It’s also frivolous, but they don’t put that in the title.

Part of the problem with this is that the editing is so fast and the camerawork is so furious that the more exciting the action gets, the harder it is to see what’s going on – something not helped by the fact that some of the car chases take place in claustrophobic tunnels.

The frivolous refers to the story, which is really just an excuse for one frantic race after another – and any attempt to get emotional is frankly laughable. Yeh right – get on with it already – give me another chase!

Without exception, every character’s personality is upstaged by that of their car – but I guess that’s the point of a film like this.

But driving aside, the film takes itself far too seriously, with what little humour there is coming from a couple of eccentric FBI agents – and apart from them, almost without exception, the extras are bikini-wearing, hip-gyrating women – shot largely between the belly-button and the knees. And for the male supporting cast, it’s little more than a tattoo-wearing competition.

If you’re the kind of person who’s happy, mindlessly watching other people playing computer games, you’ll probably find this to be good fun – but while it’s a slick piece of pacey action, there’s precious little to stimulate the mind.