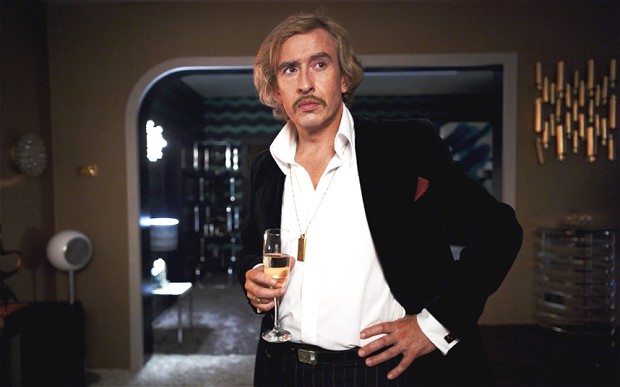 Paul Raymond (Steve Coogan) grew up in Liverpool and, as he likes to remind everyone who’ll listen, arrived in London with £5 in his pocket.

He’s come a long way since then; owning dozens of properties in Soho, and running several entertainment businesses, including Britain’s first strip club Raymond’s Revue Bar and the Men Only magazine, pornography in all but name, at a time when the censors were a little more strict than they are now; when he first used nude women in his shows, it was illegal for them to move.

Alongside his business interests are his personal pleasures – for many years, his long-suffering wife Jean (Anna Friel) turned a blind eye to the temptations he couldn’t resist from his raunchy stages and pages, but when one of them, Amber (Tamsin Egerton) becomes more than just an infatuation, his marriage finally collapses, and with it, the stability of his life.

His son Howard (Matthew Beard) sides with Jean and cuts himself off from Paul, while his daughter and chosen heir Debbie (Imogen Poots) begins to go off the rails, led astray by his magazine editor Tony (Chris Addison).

There’s no question that Paul Raymond led a fascinating life and had a remarkable tale to tell, but oddly, this isn’t it. Despite it being full of drama – overt and covert affairs, sex and drugs by the barrel-load, homes and cars that would make Premier League footballers weep with jealousy – it feels peculiarly flat.

Perhaps it’s because Steve Coogan plays the protagonist as too likeable a lad, when to become such a pioneering and dominating presence in the sex and entertainment industry, there was almost something a little more seedy beneath the surface. The battles that he clearly had with the authorities are largely glossed over, making it look like his most impressive achievements – changing the face of London night-life, for starters – is taken somewhat for granted.

He gets away with so much – but we kind of want him to – and we’re almost disappointed when things don’t go his way. He should be played as a darker anti-hero, rather than a softer incarnation of one of his comic creations.

It’s certainly the case that no-one else in the film is likeable – his wrong wife just comes across, as bitter – understandably, although it doesn’t make for an empathetic presence – and the rest are sleazy, hangers on, all fighting for their share of his pie.

The cast list reads like a Who’s Who of British entertainment, but most of the big names – Matt Lucas, Stephen Fry, David Walliams and Dara O’Briain – turn up in little more than cameos – a caberet artiste, a barrister, a cheeky vicar, a stand-up comic (must have been a stretch) – and Chris Addison, so impressive in The Thick of It, just gives us a slightly less interesting version of the same character, but with a bushy 1970s beard.

From the costumes to the decor, the film has a good sense of period and it’s a nice touch that the passage of time is presented by the updating of his Rolls Royce, every few scenes.

One of the most interesting things to note – which says something about the quality of the film – is its certificate. With all the sex and drugs, there was clearly no choice but to rate it an 18, but when films in which the scenery is painted with fresh blood frequently command only a 15, it just highlights the fact that the UK would prefer its youth is brought up on violence than a bit of cheeky, risque end-of-the-pier-style nudity.

CLICK HERE TO WATCH THE LOOK OF LOVE ON AMAZON PRIME