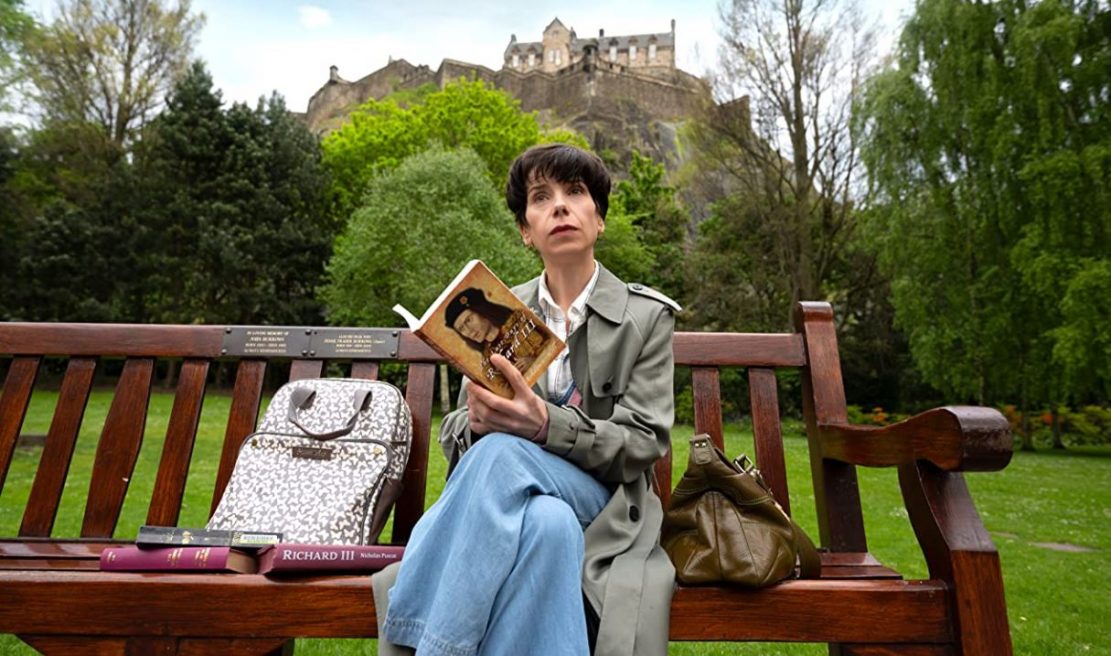 Philippa Langley (Sally Hawkins) is having a hard time both at work and at home. During a trip to the theatre with her eldest son, she feels a connection to Shakespeare’s Richard III and starts reading up on him.

She starts developing her own theories about someone she concludes has been much maligned throughout history. She also starts to doubt the generally accepted view that King Richard III’s remains were thrown into a river.

Philippa quits her job and devotes her time to trying to find his real resting place. When her family thinks she’s at work, she travels from Edinburgh to Leicester to start her search at the university.

When she thinks she’s worked out where to find the king’s body, she tries to persuade local archaeologists to help her dig.

When – as modern history tells us – she victoriously uncovers the last Plantagenet monarch’s grave, the university pushes her to the side-lines as it uses the discovery to boost its international profile.

Steve Coogan’s latest interpretation of a real-life story has none of the heft or drama of his previous collaboration with fellow writer Jeff Pope and director Stephen Frears, Philomena. A tale of forced adoption has been replaced by a rather frivolous tale of a bored mum, who gets a little carried away with her hobby.

Philippa’s obsession with finding out what happened to Richard III starts by joining a local discussion group of history nerds in Edinburgh and ends up amid the pompous academics who are more interested in her money than her theories – or her feelings.

On one level, The Lost King is an effective underdog story – as a woman with no experience of anything much persuades the archaeological establishment to join her on a journey that – to be honest – it’s almost astonishing that no-one had gone on before. There doesn’t seem to be much that she uncovers that wasn’t already known – her main gift seems to have been to put together pieces that no-one else realised were connected.

There’s some controversy over the level of co-operation between Philippa and officials at Leicester University; Coogan has adapted Langley’s own book, but University officials have claimed they gave her due credit for the discovery – in the film, she’s excluded from the press interviews, but not in real life.

There lies part of the problem with this film; where to pitch it. It’s not really a drama, as everyone knows she found the king’s remains under a council car park. Perhaps the most heart-warming moment of the film is even in the trailer, with Coogan – as Langley’s estranged husband – casually announcing to their sons, “Boys –  your mother’s found King Richard III.” So he’s had to find drama and tension elsewhere – where perhaps there wasn’t much. He’s even resorted to the rather twee device of giving Philippa visions of King Richard himself, following her on her odyssey.

The film is charming enough and Sally Hawkins is a likeable guide through the story, even if her thought processes aren’t always academically rigorous. Among the cast of grotesques, Mark Addy stands out as the archaeologist whose motives become more honourable as the indefatigable Philippa becomes more credible – although we’re led to believe that it’s when she “goes with her feelings” that she really hits the jackpot.

At its heart – it wants to be the tale of a lone woman, taking on the establishment to take history. You’d think that in a case like this, academics might have co-operated with erudite enthusiasts to get to the truth – in reality, who knows? We just have to rely on Coogan and Langley’s version of events. But rather than being a film about whether the plucky amateur succeeds, it’s more of a pedestrian procedural about how she overcame adversity – such as the source material suggests that there even was any.