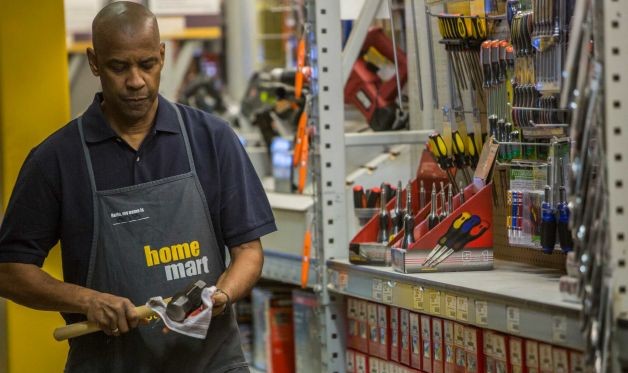 Like many men pushing sixty years of age, mild-mannered Robert (Denzel Washington) is seeing out his working years, at the local DIY superstore.

He lives alone and spends most evenings reading his book, with a quiet cup of tea, at a local dinner.

Over the weeks, he strikes up a friendship with Teri (Chloë Grace Moretz), a young escort girl who hangs out, eating coffee and pie at the same diner, as she waits for clients to pick her up.

When Teri doesn’t turn up at the cafe one night, Robert finds her in the hospital.

The vigilante in him can’t let this lie and his previous life – as a rather less meek-and-mild middle-aged man – returns to the fore as he hunts down her pimp and his gang at their headquarters and teaches them a lesson they’ll never forget.

But it turns out this prostitution ring went a little higher than he’d thought and he’s just cut off the financial operation of Pushkin, one of the most ruthless and brutal Russian mob bosses operating in the US.

Pushkin dispatches his top fixer Teddy (Marton Csokas) to find out who was behind the attack on the pimps and send a message that they won’t get away with it.

But can the brutality of the Russian mob match the determination of one man, The Equalizer.

Back in the late 1980s, if TV characters had a problem, the odds were stacked against them and they had nowhere else to turn, they sought the help of Edward Woodward, a former CIA agent turned private investigator, who aimed to equalize the odds for those in need.

All things being equal, this Equalizer takes rather too long to get going. Without giving us any back story at the outset, there’s far too much of an OCD Denzel Washington talking to a helpless Chloë Grace Moretz about the books he’s reading or the pie she’s eating before the real story kicks in. OK, she’s vulnerable and he’s taken a fatherly interest in her welfare – I get it.

But once her brutal pimps start throwing their weight around, the plot starts unfurling briskly, as The Equalizer starts targeting one bully after another, working his way through the Russian underworld, stopping off along the way to deal with the odd corrupt cop or armed robber and the like. Despite an uncharacteristically bloody high head-count, it becomes a thoroughly well choreographed, effectively executed, pacey thriller with a sense of humour.

Much of it feels formulaic, there are no grey areas – every supporting character is either a weak victim or a ruthless monster – and once the snowball starts rolling, the next time we see Moretz, we have to suffer the corniest of Hollywood screenwriting contrivances. And there are a couple of peculiar cameos from Melissa Leo and Bill Pullman – what actors of that status were doing in roles like those is almost incomprehensible.

But this is a film without any pretensions. It’s not trying to be profound. It does what it says on the tin; the goody-two-shoes Washington equalizes the odds for bullied individuals across the city in a slick, largely entertaining, with often heart-pounding action sequences, with a score that digs its way beneath your skin.

At times you feel that other films have got there first – the Final Destination team long since ran through the most innovative ways to meet your end at a DIY superstore – but you don’t go to see a big screen remake of a 30 year old TV show for originality.

The film-makers had an age-old Hollywood problem, the odds were stacked against them, they turned to Denzel Washington and he equalized the odds for them.