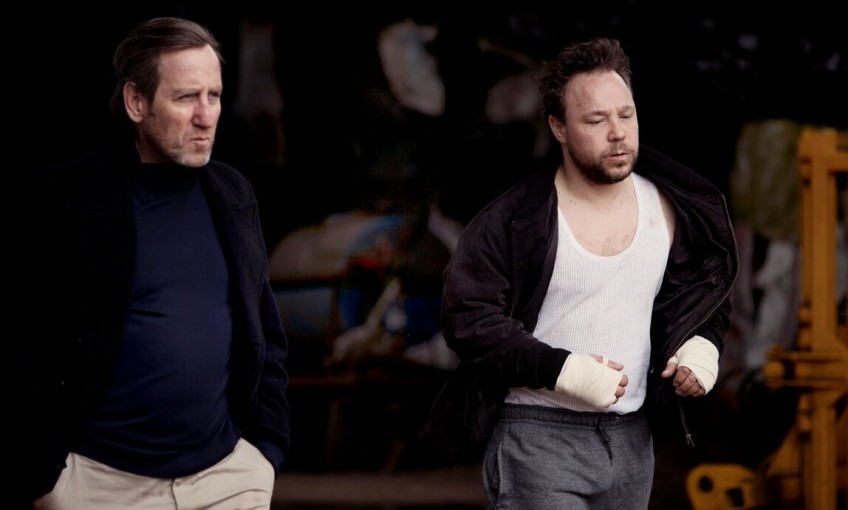 As a young boy, Benjamin Levy was bullied by anti-semitic teenagers and took up boxing to protect himself.

But his ultra-orthodox Jewish community didn’t approve of his involvement in the sport.

Further alienating himself from the community, as a young man, Benjamin (Stephen Graham) ends up marrying a woman who’s converted to Judaism, rather than grown up with the religion.

With fellow Jews turning their backs on him, the kosher butcher he owns is struggling to survive, so he does some bare-knuckle fighting on the side, to earn enough to support his wife and two sons.

The unlicenced fights are arranged by the local boxing gym owner – a long-time Irish friend of his, Shannon (Michael Smiley), who also works as an off-the-books enforcer for a slum-landlord property firm, run by an orthodox Jewish elder, Goldberg (Christopher Fairbank). Seeing that Benjamin is short of money, Shannon offers him a healthy sum to do one of Goldberg’s jobs for him, but when things don’t go to plan, Benjamin ends up behind bars.

Four years later, when Benjamin is released from prison, he finds himself more alone than ever. It seems that Shannon is the only person he can turn to, even though his only friend now appears to have a less-than-altruistic agenda.

But the arrival of Daniel (Giacomo Mancini), a teenaged Jewish boxer, at Shannon’s club helps Benjamin confront his past – and his present – and discover what he has to do to get his life back on track.

Orthodox is an earnest film with heart, but its heart is never quite in the right place.

The uninitiated might come away from this thinking that the defining characteristics of orthodox Jews are their lack of empathy, isolationism and involvement in organised crime.

But while it’s true that the ultra-orthodox Jewish community – for that is where this is set and that is about as far from orthodox Jewry as it is from Catholicism – might not jump for joy at the idea of one of its members turning to boxing, it’s also true that Jewish men were among the most successful boxers, on both sides of the Atlantic, for most of the first half of the Twentieth Century, so the concept is, at the very least, not unusual and at most, almost traditional.

It’s also unexplained why Benjamin indulges in unlicenced bare-knuckle fighting, if he’s meant to be such a talented boxer. If his butcher’s shop is struggling, it’s more likely to be because he has no stock, rather than because he’s being boycotted – and if he is being boycotted, where on earth else are the observant Jews buying their meat in this close-nit community? And it’s never quite clear why, if Benjamin wants to feel part of the ultra-orthodox community where he grew up, he doesn’t wear the same clothes and grow a beard – if he makes himself look like an outsider and behaves like an outsider, he shouldn’t be surprised that he’s treated as such. And if he’s actively trying to be an outsider, a key element of the dramatic conflict is moot.

During the course of the narrative, certain secrets about his close family emerge, but they are by turns unconvincing or irrelevant.

From time to time, we see Benjamin carrying out a Jewish prayer ritual, but we don’t see the religion bringing him any solace. And there is no humour in the film or in his life, making this an unremittingly grim and somewhat unsatisfying drama. If you can go with observant Jews being the ruthless crime bosses of the story, then the idea of them hiring an Irish outsider to do their dirty work is an interesting aside.

Stephen Graham’s performance is honest enough that you will want to identify with him, but the plot doesn’t make it easy. Michael Smiley delivers as good a turn as you’d expect from him, although Shannon lacks complexity. And the other key characters feel like they come from central casting – but mostly, for the wrong film.

Orthodox is beautifully shot but the direction is rather clunky, with flashback used rather too readily and it fades to black often enough that it’s as if the director is already thinking about where the TV ad breaks will go.

It’s a low budget British film, whose theatrical release is as unorthodox as its story-telling, so if you’re interested in seeing it, you’ll need to hunt it out.