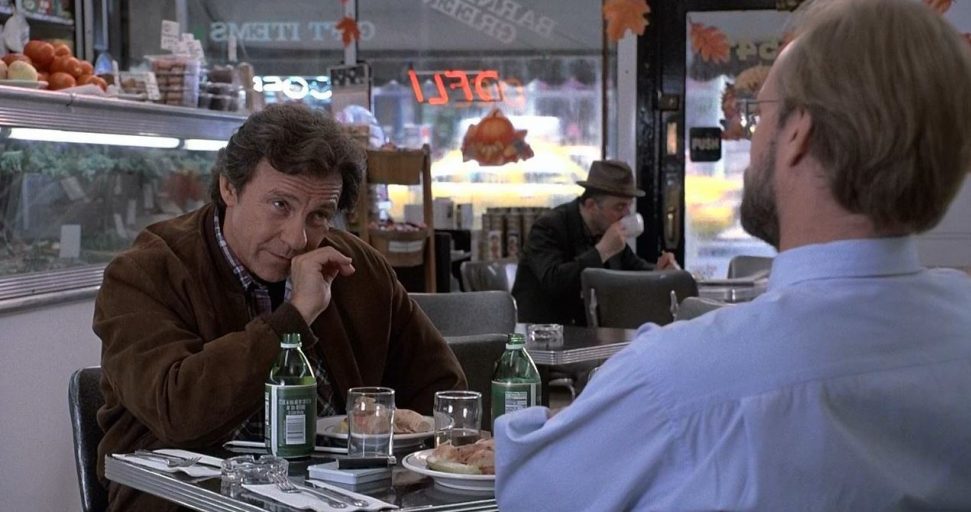 Despite being set in the summer of 1990, “Smoke” is a film with its roots in Christmas. It’s based on “Auggie Wren’s Christmas Story”, a short story by the novelist and screenwriter, Paul Auster, which was published in the “New York Times” on Christmas Day that year.

Auggie Wren (Harvey Keitel) has run a cigar shop in Brooklyn for more than 10 years, and the film chronicles the intertwined lives of a handful of people who come together through their links, however tenuous, to his shop.

One of them, Paul Benjamin (William Hurt), is a novelist, who hasn’t been able to write a book since his wife was killed a few years earlier. When a lonely teenager, Rashid (Harold Perrineau Jr) saves his life on a busy street, Paul takes him in and becomes like a surrogate father.

During the course of the film, Rashid tracks down his real father, Auggie’s ex-girlfriend arrives to borrow money to help the daughter she claims is his, and a gang of violent armed robbers hassle Paul to retrieve the cash they say Rashid stole from them.

These are just some of the events in the lives of the cigar shop regulars, and recording this small corner of the world is Auggie who takes a single photograph of his shop at the same time each morning.

This photographic element of the film, discussed near the beginning, returns in the final scene, when Auggie relates his christmas story to Paul. Like the film itself, Auggie’s story is a charming and whimsical tale about the importance of friendship, family bonds, racial harmony, and going out of your way to help others.

“Smoke” isn’t anything like as worthy as this might sound, and while the pace might seem a little slow, the natural performances make this delightful ensemble piece a diverting and warm-hearted study of some of the more positive aspects of human nature.

This review was previously published on the bbc.co.uk/films website.