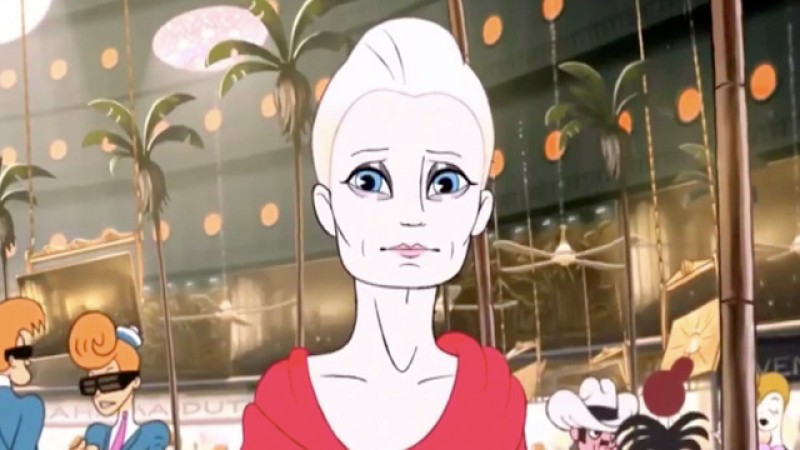 Robin Wright is an fading actress whose bad career choices have left her unattractive to studios. She’s still loved for her earliest roles, but no-one is interested in her now. So her agent (Harvey Keitel) encourages her to sign a new contract with the head of Miramount studios, Jeff (Danny Huston).

This is the contract to end all contracts; Miramount want to scan her body and her voice and use her image to star in future films, while banning her from acting in person again. Desperate to support her children and unable to get any more work, she accepts the deal, but insists that the contract is only for 20 years, not for life.

So, 20 years later, Robin is summoned to the studio, where Jeff wants to extend the contract. Things have changed over the past 20 years. She’s now the biggest star on the planet – at least her computerised image is – but many people are now living in a peculiar dream-world and that’s where she has to go to meet Jeff, again questioning her perception of the world around her.

It was initially a surprise to attend a film directed by the creator of Waltz with Bashir to find a live action film, but it’s the second part of the film – when she returns to renew her contract – where you get the animation you might have expected.

But while the images are gorgeous, colourful and tremendously imaginative, a coherent and interesting narrative is sacrificed to allow for the animation.

The Congress begins as a satire on Hollywood and modern technologies – if not entirely original; S1m0ne entertained the idea of a virtual actress more than a decade ago – but it becomes a hypnotic, hallucinogenic explosion of colour and sounds that makes you dig deep into your psyche but doesn’t really deliver.

The story is presumably clear to Folman and his team, but it’s almost impenetrable for audiences whose expectations are constantly thrown around by this amalgam of reality and animation that ultimately becomes no different from any other film in which characters try to switch between real and dream worlds.

If you are happy to sit back and let the images and ideas wash over you, there’s much to enjoy, but if you prefer to make sense of what you’re watching, this film is hard work, somewhat pretentious and not entirely satisfactory.

After Folman’s previous examination of Israel’s 1980s war in Lebanon, this film seems to lack the gravitas of its predecessor and any intended message is less evident.