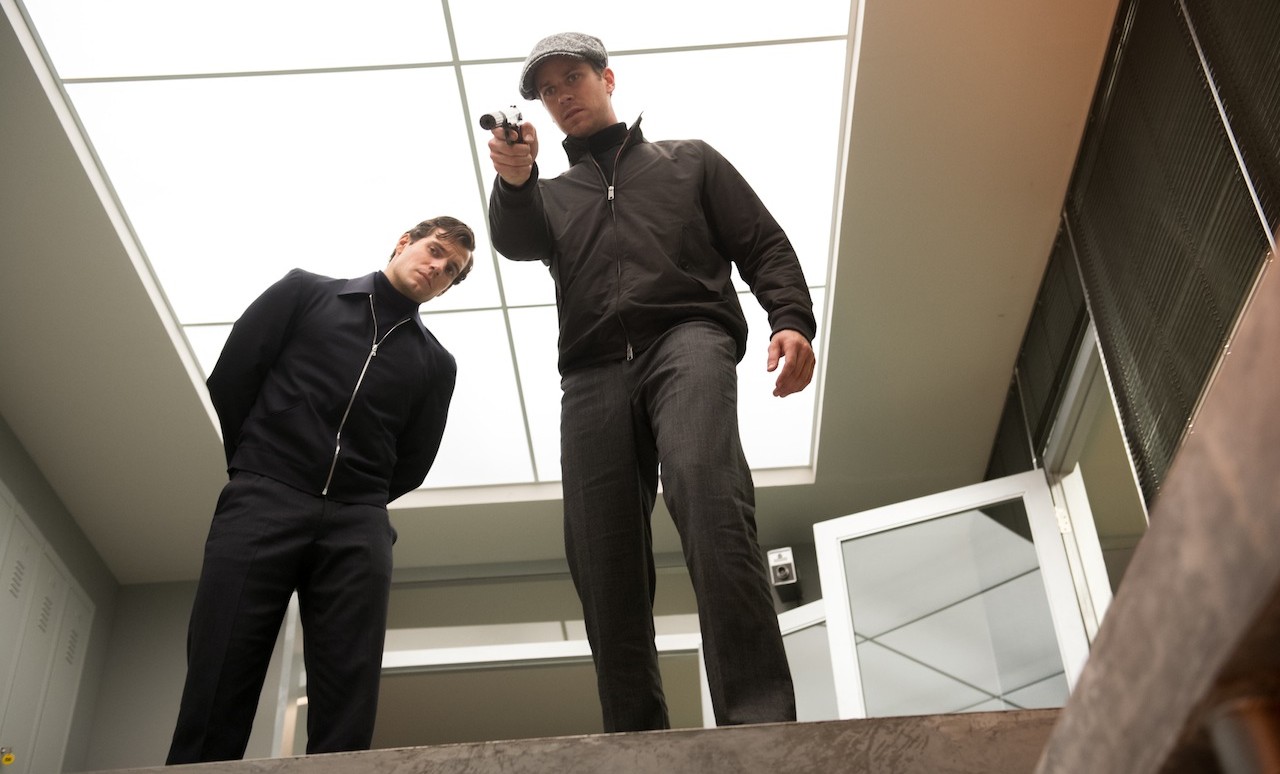 It’s 1963 and CIA spy Napoleon Solo (Henry Cavill) is in East Berlin, trying to exfiltrate a local car mechanic, Gaby (Alicia Vikander), in the hope that she’ll be able to help him track down her father, who’s suspected of building a nuclear bomb for a gang of Nazis.

The KGB’s Illya Kuryakin (Armie Hammer) is also hot on her trail and does his best to stop the American getting her into the West.

But before long, it emerges that unbeknown to them, Solo and Kuryakin’s handlers are working with a new agency, codenamed UNCLE, through which the CIA and the KGB are co-operating to tackle their mutual enemies; their first job involves pairing up Solo and Kuryakin and using Gaby to help them stop the fascists developing their nuclear bomb.

But through a series of encounters with everyone from Italian racing drivers to Nazi goons and British spy chiefs, what’s expected to be a relatively simple mission doesn’t quite unravel as planned.

As the title suggests, this film is based on the 1960s TV show that starred Robert Vaughn as the American spy and David McCallum as his unlikely Russian partner.

Adapting TV shows into feature films is clearly nothing new; it’s been done with varying degrees of success from the 1950s police show Dragnet to 1960s spy series Mission: Impossible and Get Smart, from 1970s crime classics Starsky & Hutch and Charlie’s Angels to the 1980s shows The Equalizer, 21 Jump Street and The Naked Gun – then there sci-fi favourites, such as Star Trek and the X-Files that have also made the jump. There are also British classics, such as The Sweeney, Paddington and the upcoming Dad’s Army.

The studios clearly welcome the opportunity, given the right show, to use the episodic nature of the source material into a ready-made franchise.

Sometimes, we’ll see the same actors starring in, essentially, feature length episodes of their own TV shows, enabling producers to capitalise on their existing successful brand, while other times we get a full-on reboot, sold by the new names rather than the old ones.

It’s these reinventions, often made many decades after the shows they’re based on have been forgotten, that have the highest risk factor for the studios; all they have to attract an audience is fond, childhood memories or vague recollections of shows that your grandparents used to talk about having watched when they were kids. The Man from U.N.C.L.E. is, in that sense, a brave choice for an adaptation as, having been broadcast in the mid-60s, most people who remember watching it at the time will themselves be in their mid-60s or older and that age group is not the audience that would rush to the cinema to watch a Guy Ritchie film. Similarly, fans of Superman’s Henry Cavill and The Social Network’s Armie Hammer won’t be picking their weekend’s entertainment based on that TV show their grandparents fondly remember.

So this film really needs to be considered outside the context of its predecessor and as such, it’s a stylish, pacey spy film-cum-buddy-movie, with an odd-couple of agents, from opposite sides of the Iron Curtain being forced to work together; there’s the easy-going, cocky ladies-man from the US and the stuck-up Russian jobsworth who clash from the moment they meet – literally, at first – on everything from espionage techniques to fashion faux-pas.

Both the size of a small terraced house, Cavill and Hammer seem more like beautiful boy bouncers than true spies and indeed don’t seem to be especially good at spying, for two men who are meant to be the best their agencies have to offer, but they bounce off each other nicely enough and Ritchie wrings some unexpected humour out of the format, but some of the gags feel out of place in a Cold War movie about Nazis building a nuclear bomb. While neatly choreographed action scenes pepper the film, much of the spy-work is clumsy, clunky or convenient and the narrative unfolds in a workmanlike but uninspiring fashion. And even though we’re talking about nuclear Nazis, the stakes don’t feel high enough as it feels like the director Guy Ritchie is actually more interested in the bromance than the impending global catastrophe.

The villains lack the memorable qualities of the kind of baddies you’d get in a Bond film or a Marvel comic adaptation – no-one’s going to be rushing to the fancy dress shop to pick up any of these stylish 1960s outfits to go to parties as any of these characters.

Almost everything in this film has been done better before – much of it on 1960s TV or in Ritchie’s own earlier films – but that doesn’t make it any less entertaining. The action zips along with the lead characters sharing more screen chemistry than either of them shares with anyone else, while Alicia Vikander is a perfectly watchable female foil, even if little about her character or storyline is particularly convincing.

Tom Cruise pulled out of playing Napoleon Solo to make the latest episode of his Mission:Impossible series, which was a smart move, because his franchise has better action, more imaginative gadgets, higher stakes and more interesting characters.

From the man who burst onto the scene with Lock Stock and Two Smoking Barrels and reinvented Sherlock Holmes for the big screen, The Man From UNCLE is enjoyable enough but feels just a little undercooked.