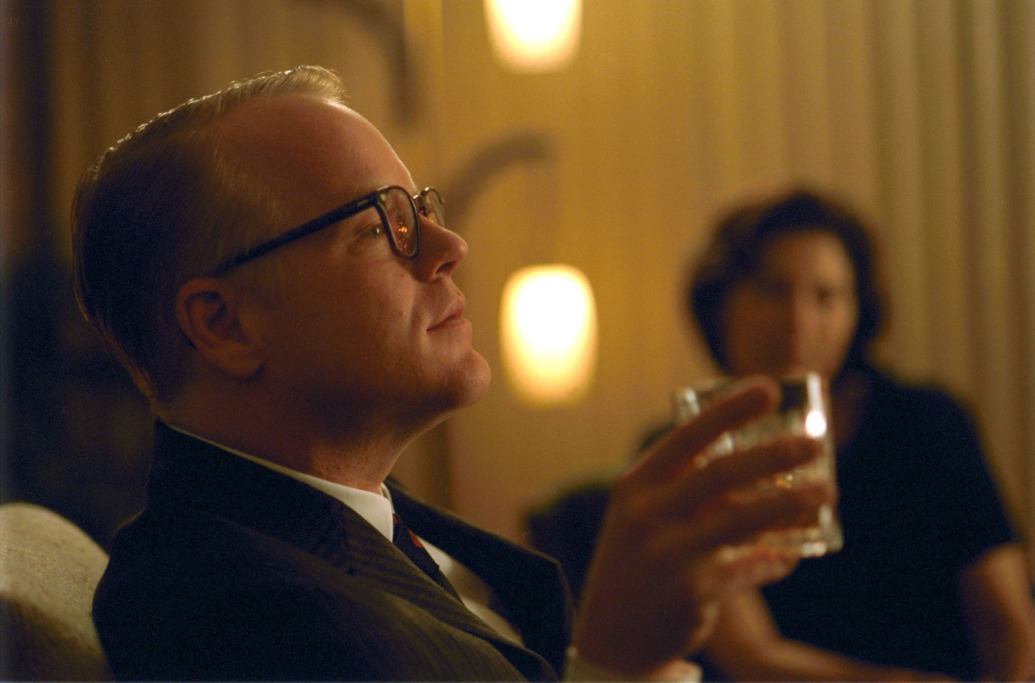 When writer Truman Capote (Philip Seymour Hoffman) reads about the horrific murder of four family members at their home in Kansas, he’s drawn to the story and gets commissioned to write an article about it.
Taking his friend Harper Lee (Catherine Keener) along as his research assistant, he discovers that there’s enough in this to write a full book and his publisher (Bob Balaban) agrees.
As the suspects are arrested, tried, convicted and sentenced to death, Capote interviews them in their cells as he tries to uncover what drove them to commit such a gruesome crime.
His account of the case became one of his best-known works, In Cold Blood.

This film is likely to leave anyone unfamiliar with the works of Truman Capote rather in the cold. A writer interviews some murder convicts to find out why they did it – they don’t want to tell him, but eventually they do. So what? OK, so the interview developed into a seminal piece of US literature, but if you’re not into US literature, why should you even care?
While horrific, the murder in question doesn’t seem among the worst in history, so it’s the killers themselves who were clearly the draw for Capote. One of them is almost written out of history – and this film – altogether, as it concentrates on Capote’s relationship with Perry Smith (Clifford Collins Jr), but it’s unclear whether Capote has developed an attraction towards him or is simply couching his manipulativeness in geniality to get the story.
It’s not particularly satisfying in terms of being a strong drama or the personal development of the main character. The importance of Capote’s aim in completing his book also fails to grab you. If he’d failed to get the story before the killers were executed, would the world be a difference place today? Only for those touched by Capote’s work.
For anyone else, this will be like watching a slow, overlong interview of a killer by a writer – admittedly a fascinating one, expertly portrayed by Hoffman.