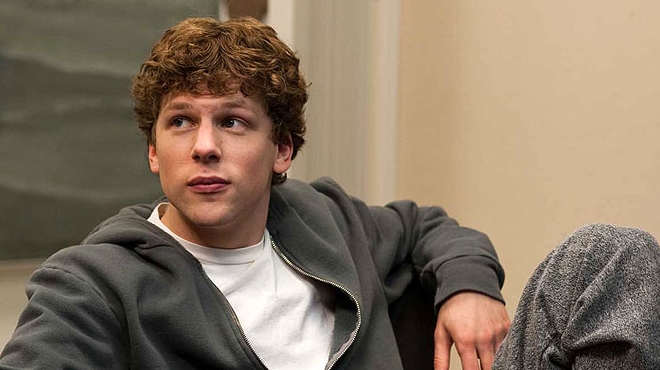 Cyber-nerd Harvard student Mark Zuckerberg (Jesse Eisenberg) has just been dumped by his girlfriend, for being a rather stuck-up, pompous, egostistical, supercilious, intellectual snob.

He’s not the most popular kid on campus – it’s only really people with computer problems who want anything to do with him, apart from his room-mates and his one and only real friend, Eduardo Saverin (Andrew Garfield).

He passes his time, working out ways to hack into the intranet sites of halls of residence across Harvard, stealing the photos of the students and compiling them into his own viral websites to entertain his fellow students.

He gets taken aside by a couple of giant Harvard rowers, the Winklevoss twins (Armie Hammer) – or the Winklevi, as Mark calls them – and they ask him to write the code for a website idea they have, which allows everyone at Harvard to set up pages that link to their friends.

This gets Mark’s mind ticking – rather than working on their project, he comes up with a much better idea of his own, which he calls The Facebook. The website, funded by Eduardo, takes off big time and soon spreads to other universities around the country – and the world.

When the Winklevi realise what he’s doing, they’re furious – and before long, when they see the potential of their own website waning, they decide to sue him.

Meanwhile, as Eduardo’s legal career takes off, he has less time to devote to the company, so Mark seeks the inspiration and support of Sean Parker (Justin Timberlake), who some of you may realise has form in this area, having set up Napster.

Eduardo soon realises that he’s been eased out of the company and begins his own legal action against Mark.

This film documents the two concurrent legal cases against the Facebook founder – or was he? – flashing back to the events that brought him to two legal conference tables and one of the biggest fortunes in the world.

It’s hard to criticise this film.

The performances are universally outstanding – Eisenberg does a remarkable job of making you root for someone who’s every bit a stuck-up, pompous, egostistical, supercilious, intellectual snob that his ex-girlfriend brands him as in the opening scene. Watching one of the world’s most anti-social men setting up the world’s most successful social network is an irony in itself.

And part of the way this is done is through a remarkable script – The West Wing’s Aaron Sorkin delivers the kind of sharp, incisive dialogue where every line’s a winner that you’d expect.

It’s a pleasure watching the fast-talking Mark Zuckerberg and the smooth charmer Sean Parker trampling over anyone who gets in their way while building up an entourage of adoring followers, like some kind of a cult.

But there are problems with the structure and indeed the subject matter.

This film is essentially a bunch of people talking to each other – in college dorms, restaurants, clubs, houses, and conference rooms. What they’re saying is always awe-inspiring and sometimes admirable in its precision but rarely instigates any emotional reaction.

And given that for most of the film, we’re watching two legal cases taking place and flashing back to the events described therein, the film doesn’t quite make it all the way to the conclusion we’re waiting for – it’s as if Sorkin and the team eventually get bored, fade to black and give us a couple of captions saying “this happened in this case” and “that happened in that case.” It’s like watching almost a whole series of Damages and replacing the final episode with a caption to tell you the result of the court case.

And while many of us use Facebook, in truth, the questions have to be asked, “Do we begrudge a genius his success because he’s a cantankerous git?” and “Does it really make any difference to any of us who invented the website, anyway?”

The film is a highly entertaining look at a piece of recent history for geeks and IP lawyers, but it doesn’t really enrich the world and is consequently very forgettable.