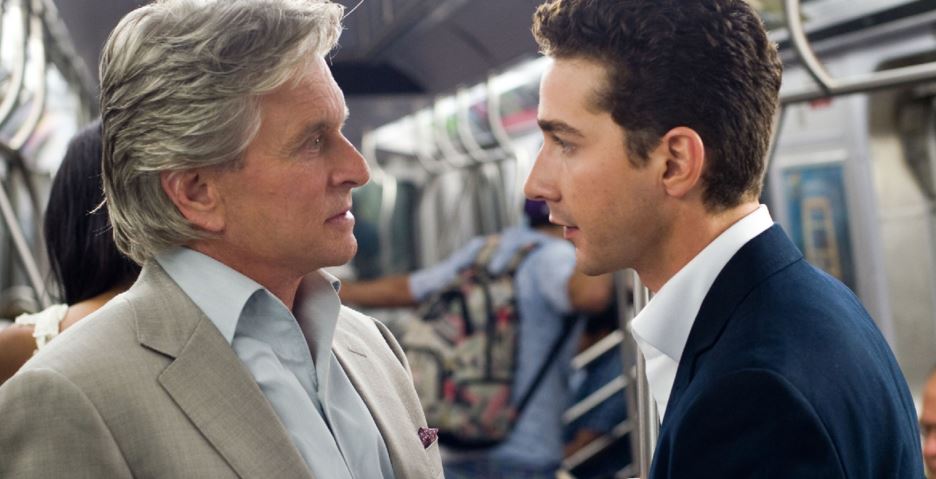 It picks up where it left off at the end of the original Wall Street.

Having served eight years behind bars Gordon Gekko (Michael Douglas) emerges from prison in 2001 to find there is no one there to meet him – not even his daughter Winnie (Carey Mulligan) who is estranged from him.

The financial crisis is looming. Young Wall Street trader Jake Moore (Shia LaBeouf) teams up with Gekko to find out who killed his mentor and to help Gekko patch things up with his daughter who is also Moore’s fiancée.

Gekko is however hell-bent on revenge.

Michael Douglas makes a triumphant return as the iconic Gordon Gekko whose mantra is now “greed is good – now it seems it’s legal.”

Gekko won Douglas an Oscar in 1988 and 22 years later the former king of Wall Street is just as charismatic and devious thanks to Douglas‘ memorable performance.

You can’t help liking and secretly admiring him. Douglas is the only one frankly worth watching in this sequel.

LaBeouf, who has the charisma of an amoeba, is no Charlie Sheen who incidentally makes a cheeky cameo appearance.

While Mulligan is wasted as Gekko’s daughter spending most of the film balling her eyes out. She deserved better.

Oliver Stone seems to have lost his angry edge because this movie lacks the passion, the drive and the fury of the original.

This film is about money at all costs and the people who will do anything to achieve great wealth and power and it should have focused on that alone. But Stone weighs this sequel down with the secondary plot of Gekko’s rapprochement with his daughter. It makes it overly sentimental and is unnecessary.

Gekko seeking revenge against all those who betrayed him while trying to become financial top dog again is gripping to watch and makes perfect sense. Gekko vying for father of the year doesn’t.

A leopard can’t change its spots despite Hollywood filmmakers.

Sadly Wall Street: Money Never Sleeps (a line from the original film) is not a classic in the making but Douglas’ unforgettable performance as Gordon Gekko is.