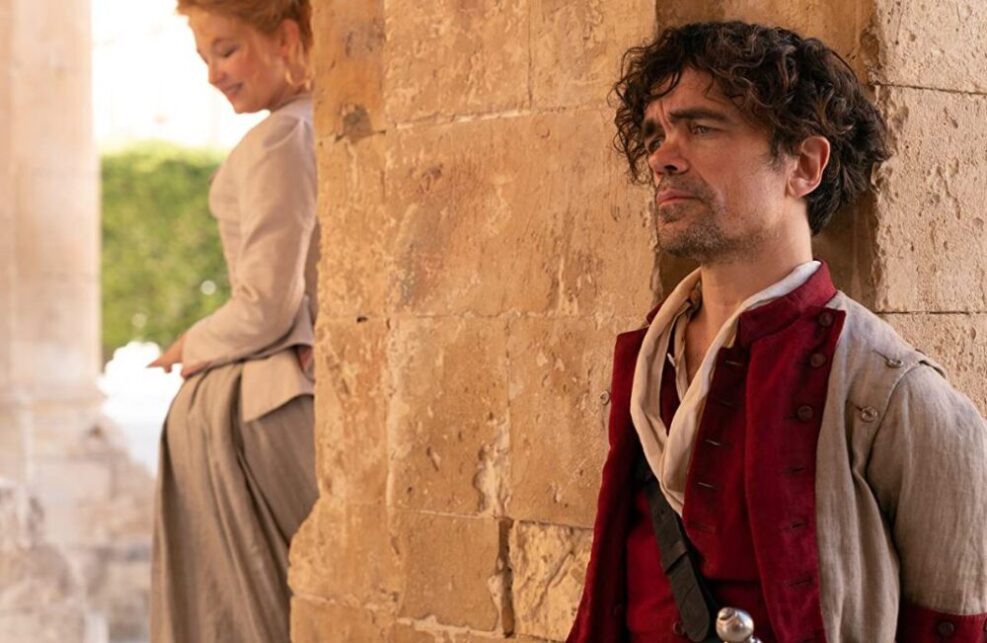 She loves Cyrano as a friend, but she’s more attracted to the newest soldier in the regiment, Christian (Kelvin Harrison Jr), who is dumbstruck when he hears how she feels about him.

Literally stuck for words, Christian is grateful when Cyrano agrees to provide passionate and heart-wrenching love letters with which he can woo the woman of his dreams – the woman of both of their dreams.

But the local aristocrat, the Count De Guiche (Ben Mendelsohn) is determined to use his money and power to secure her love.

An impending war brings the competing challenges for Roxanne’s heart to a head as truths begin to emerge, in the latest adaptation of this classic tale of unrequited love.

Viewers over 40 will probably have an image in their mind of Cyrano as a big-nosed Gerard Depardieu or Steve Martin with a perch for the little birdies on his face.

In an interesting twist on a theme, in this version, based on Erica Schmidt’s stage musical, Cyrano’s insecurity about his appearance comes not from a nasal eccentricity but his stature, as Schmidt’s real-life husband Peter Dinklage takes on the role.

He’s not an actor one might associate with musicals and does well enough in the circumstances; his co-star Haley Bennett is more known for her singing and seems more comfortable.

But the songs themselves aren’t memorable enough to warrant turning this well-worn tale into a musical. Only one song will stay with you, rising head and shoulders above the rest; in the haunting and heart-breaking Wherever I Fall, Glen Hansard – an Oscar-winning singer for Falling Slowly from Once – and his fellow soldiers lament their impending charge, fearing they will never see their loved ones again. But the musical highlight of this musical – and the emotional highlight of the film – feels tacked on, as none of those singing are even involved in the main story – and sadly, it will be denied Oscar recognition by virtue of it being reprieved from the stage, rather than written specifically for this production.

Sumptuous costumes and stunning production design make this a feast for the eyes, while Dinklage is convincing and Monica Dolan – as Roxanne’s maidservant – steals every scene she’s in. Kelvin Harrison Jr is necessarily bland – it’s right for the character but doesn’t help the film. But a key point of the vicarious love story doesn’t quite work, with Cyrano’s letters not being especially mellifluous, while Christian isn’t as useless with words as he needs to be – while the conceit of the film makes the heroine seem rather shallow.

Much of the melodrama doesn’t make sense – there are plot points from the Edmond Rostand’s original novel which are slipped in, unexplained, with most of the context stripped out of a narrative slimmed down for simplicity, if not clarity. There’s also precious little of the humour that imbued the earlier tellings of the story, making the building tragedy feel like a bit of a slog at times, but while the songs break it up, they’re neither uplifting nor enlightening.

And the coda, while faithful to the novel, makes for a rather nihilistic anti-climax, after all we’ve been through to get to that point. It’s a rare example of a love story whose heart is in the wrong place.