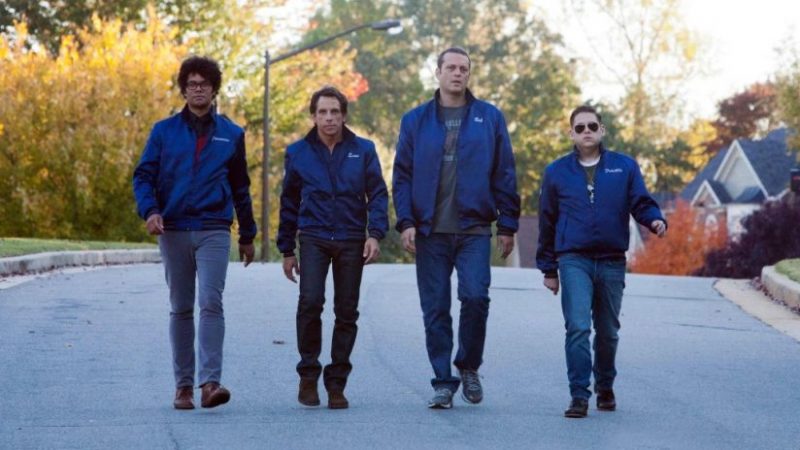 Evan (Ben Stiller) is a bit of a local hero – or busybody – depending on how you see him. He’s the manager of the local Cost-Co superstore but rather than rushing home to his long-suffering wife Abby (Rosemarie DeWitt) after work, he’s off organising a whole number of local clubs and societies – the running club is one of his favorites.

After one of his store security guards is mysteriously murdered during a night shift, Evan decides to set up a neighbourhood watch scheme to try to find the killer and to protect the rest of the community.

While everyone in the town is worried about having a killer on the loose, only three loose cannons turn up for the inaugural meeting; businessman Bob (Vince Vaughn) is more interested in the socialising aspect of this new club, Franklin (Jonah Hill) is the creepy single guy who’s looking for an opportunity to use the arsenal he keeps hidden from his Mum under his bed and for the new arrival Jamarcus (Richard Ayoade), the Watch is a chance to meet some of the neighbours.

At every point – whether they’re trying to stake out the store to see if the killer returns to the scene of the murder – or whether they’re investigating other curious locals, they’re hassled by the police, cantankerous gun-toting residents or skate-boarding youths.

But when they finally find out who – or what – was responsible for the killing, their whole lives are turned upside down and the future of the whole world is resting on their shoulders.

The film starts with promise – if you like this sort of thing, at least – a group of unlikely friends coming together with comic potential to protect their neighbourhood.

Stiller himself has appeared in another far better version of this story, as the hapless wannabe who brought together a band of powerless heroes to protect their neighbourhood in Mystery Men.

That film pushed the boundaries further, sought and found humour in the most unexpected places and was an effective satire on modern culture.

This time around, Stiller and co rather drop the ball. The characterisations are slim and derivative of earlier work; Stiller is a less interesting version of Mystery Men’s Mr Angry as the straight man ring leader, Hill too fits into a Mystery Men role, filling the shoes of Hank Azaria’s Blue Raja, living with his domineering mother, hiding an armoury in his bedroom, Vaughn portrays the kind of loud-mouth he’s inhabited many times before – but is no less funny for it – and Richard Ayoade just plays himself, charmingly entertaining, but nothing new to a British audience.

The Watch starts with the promise to be at least a pale imitation of Mystery Men, but a key plot point, which I can tell you – because it features in all the trailers – throws the film into a direction that leaves it a confused mess; it turns out that the murder that prompts the protagonists to set up their neighbourhood watch group was carried out by an alien. Then, rather than being a comedy of manners and mismatched men, it tries to blend an admittedly well-worn formula that had potential for humour with an alien invasion film.

As an extra-terrestrial film, it feels as half-hearted as it does nonsensical and incoherent, but its efforts and concentration in this direction make it miss the mark as a human comedy. Plot lines involving Rosemarie DeWitt and Billy Crudup feel equally out of place in the mess that results.

The Watch has its moments, but they’re too few and far between. And much of the humour is aiming far too low; when the director’s cameo role is credited as “Casual wanker number 3,” you can tell what kind of film you’re letting yourself in for.

It’s the worst of all worlds and disappointingly not one to watch.