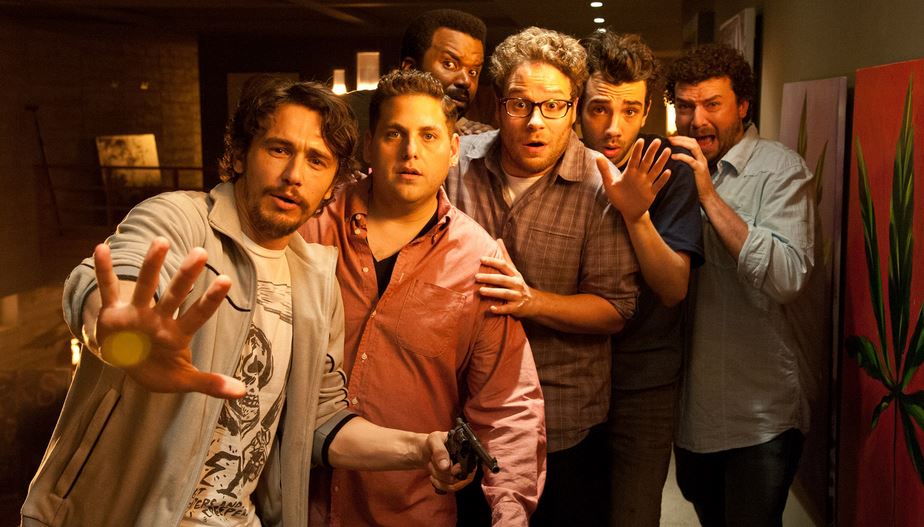 Jay Baruchel (himself) arrives in Hollywood from Canada to visit his good friend Seth Rogen (himself) and is disappointed to hear that rather than just hanging with Seth, he’s going to have to go to a big party at James Franco’s (himself) house.

Jay has never been much into the Hollywood scene and he’s never really got on that well with Seth’s other friends, particularly Jonah Hill (himself).

During a lull in the party, Seth and Jay pop out to buy some more booze. Jay just wants to head back to Seth’s but while they’re at the shop, the evening takes an unexpected turn; explosions, flashes of light from the sky – is it an alien invasion? No. The apocalypse is starting. This is the end.

The pair manage to make it back to James Franco’s house where a small core of Hollywood’s comedy elite try to hold their own against the demons from hell, sent to collect anyone who doesn’t deserve to go to heaven.

It’s certainly original – I’ll give it that. How many films do you see with celebrities, playing themselves, facing the apocalypse, in a world where Hollywood stars are so conceited as to think that actors are so revered that they’d get rescued first? One. And this is it.

It’s undoubtedly fun – evidently more for the actors than for us – but most of the fun comes from spotting one comedy star after another as they pop up for their cameos, in the early stages of the party, and then watching them being sucked down to hell – so once only the hardcore remain, and we’re left with a group of misfits locked in a house, this film is not so different from many others, where a small group of protagonists are trapped in a confined space, under threat from adversity.

Most of the stars play themselves – or at least recognisable versions of themselves – but a handful, including Michael Cera and Emma Watson, get to subvert our expectations, which adds to the unpredictability and at least surprises us.

It’s disappointing that the most enjoyable parts of the film are the throwaway moments before the plot kicks in, but once they start fighting demons – and each other – it becomes a run-of-the-mill supernatural thriller that can’t really decide whether it’s trying to be funny or scary; it doesn’t really have enough of either.

It’ll go down well with audiences who’ve been enjoying what Jay had been hoping to enjoy at Seth’s house, before being forced to party with James. The big-star names themselves will draw in fans, but many will be disappointed at two jokes – comedians playing versions of themselves and actors trying to survive the apocalypse – being stretched, unimaginatively across nearly two hours.

This is the End is a good idea pushed too far; self-indulgence pushed to the extreme. It has its moments, but it’s more miss than hit. This is not the end of the world – but if Hollywood could take a step back and look at itself, this should be the end of actors directing themselves and playing themselves, without having a good enough script.