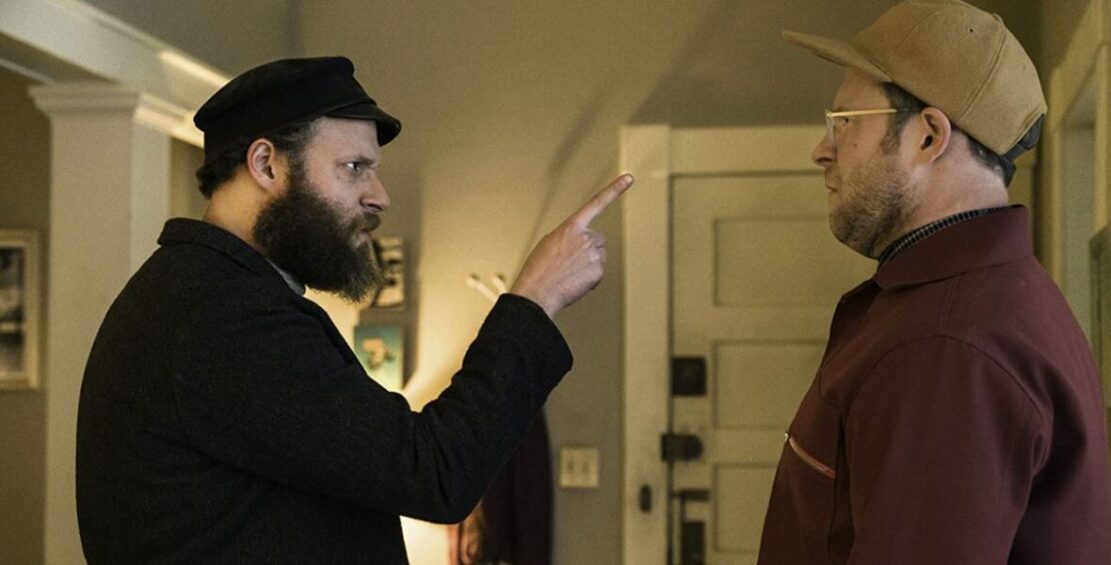 In 1919, Herschel Greenbaum (Seth Rogen) sets off on his journey to seek the American dream. He and his wife Sarah (Sarah Snook) leave their eastern European village and arrive in New York City to start a new life.

They get by, but they struggle and Herschel prays that his descendants are rich and successful – and can afford the finer things in life they can only dream of, such as sparkling water.

But in an accident at work, Herschel falls into a vat of pickled cucumbers and is never heard from again – well, not until a pair of teenagers disturb the disused factory a hundred years later and find him to be perfectly preserved.

In modern day Brooklyn, the authorities unite him with his only surviving descendant – lonely, mobile app developer, Ben (Seth Rogen again), is his great-grandson. He’s not rich, but he has sparkling water.

With both of them, deep down, craving a sense of family and belonging, they’re desperate to get along, but separated by generations, they have ideals so different that they push each other apart.

They wind each other up the wrong way and do their best to ensure that the other fails – until they push each other to the brink.

This is a veritable pick and mix of a film – scattered throughout are more tasty treats than you can imagine, but while it’s mostly a lot of fun and often thought-provoking, it doesn’t really add up to the sum of its parts and you’re never quite sure what you’re watching.

At its heart is a fish-out-of-water tale, as Herschel finds himself waking up a hundred years into his own future and has to learn to live in a completely different world – from the vehicles and the technology to the social attitudes, which provide fertile ground for another of the themes – satire – as it pokes fun not just at politics, but religion and social media as well.

Seth Rogen switches well between Herschel and Ben and the effects team ensure that the two Greenbaums fit together and bounce off each other seamlessly. But there aren’t really any other characters that feel essential enough to the plot, making it feel a little too much like the Seth Rogen show.

Rogen, writer Simon Rich and director Brandon Trost have a lot of fun with placing an early Twentieth Century patriarchal eastern European Jew in a modern-day, Christian liberal democracy that’s as obsessed with freedom of speech as it is with having the right to be offended.

There are some very subtle swipes at the Trump administration and in interesting aside that suggests that the UK’s Windrush scandal has its own equivalent in the US, where immigrants to Ellis Island, more than a hundred years ago, wouldn’t have had enough of a paper trial to support their continued residence.

But with so many different genres being presented, the tone feels a little uneven – and the point seems to get a little lost. It sways from subtle to in-your-face, warmth to on-the-nose, satire to family drama – there was a lot of potentially good material, but perhaps not enough editing.

Some of the genres are more forgiving of incoherent or contrived plot points than others, but while this narrative is necessarily nonsense most of the time, the final fifteen minutes just gets a little out of hand and when it’s that unbelievable, viewers who were enjoying the ride will end up rolling their eyes before they get off.

Rogen and the team get themselves into a bit of an American Pickle – but they manage to emerge unscathed, just about pulling the right ending out of the hat, after a slightly more contrived and confused journey than they needed.