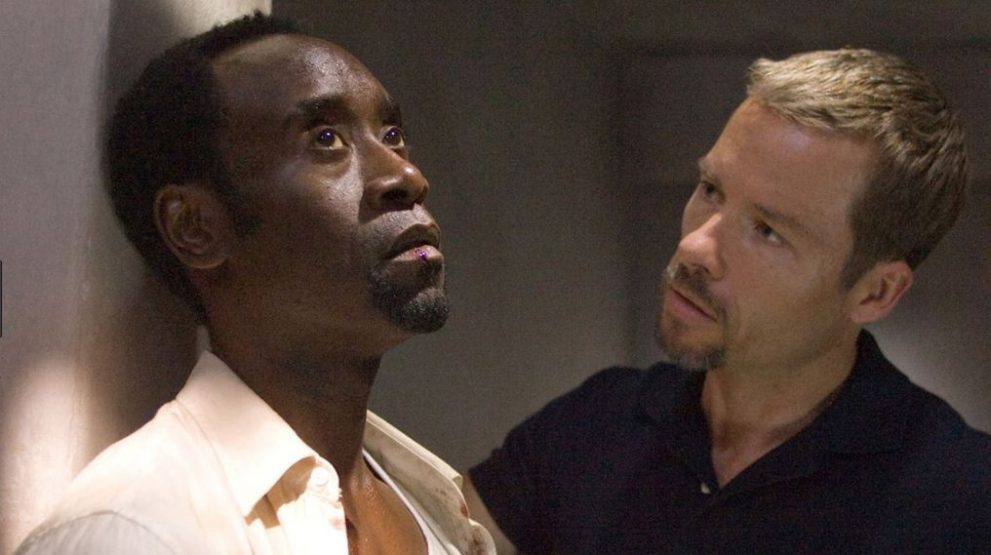 As a young boy in Sudan, Samir sees his father blown up by a terrorist car bomb.

As an adult, having moved to the US, joined – and left – the military, he (Don Cheadle) is now a fully-signed up believer in Islam, and makes a living, selling explosives to the kind of terrorist organisations that killed his father.

When the authorities swoop on one of his deals in Yemen, arresting him, along with the militants he’s selling to, a crack FBI team, headed by Special Agent Clayton (Guy Pearce) flies in to question him. He refuses to speak to them and ends up in a bleak, Yemeni jail, where alliances have to be formed to stay alive.

When his new friends manage to break out of the prison, they take him with them, and he joins them in planning an ambitious series of co-ordinated bus-bombings across the United States, travelling the country, recruiting bombers, providing the explosives and training the zealots how to use their bodies as weapons against the infidel.

But the American security services get wind of the attack and a range of agents from the FBI and CIA scour the globe to trace those involved, to stop what looks set to be a devastating terrorist attack.

On one level, if you go into this film knowing the title, you’re left with just one question – as the main character, Samir must be the eponymous “traitor” but is he a traitor to the US in planning these bomb attacks against American targets or is he a traitor to the terrorist organisation, by collaborating with the security services?

The problem is that this is made very clear far too early, which takes most of the excitement and intrigue out of the film.

Another problem is that in order to try to conceal this, Cheadle’s character isn’t allowed to be too expressive, as this would undoubtedly give the game away, but this means that any emotional edge the film might have is somewhat diluted.

The film is also a little blunt in its exploration of the detriments of collateral damage.

If you can try to forget about the title, shake-off any frustration at the necessarily detached nature of most of the characters and ignore some of the naive moralising, you should find this to be a fun and effective thriller, if a little formulaic.

It’s an interesting insight into the workings of both the terror cells and the agents who are trying to catch them – assuming we can believe that the writers know enough about what really happens to be portraying it on screen.