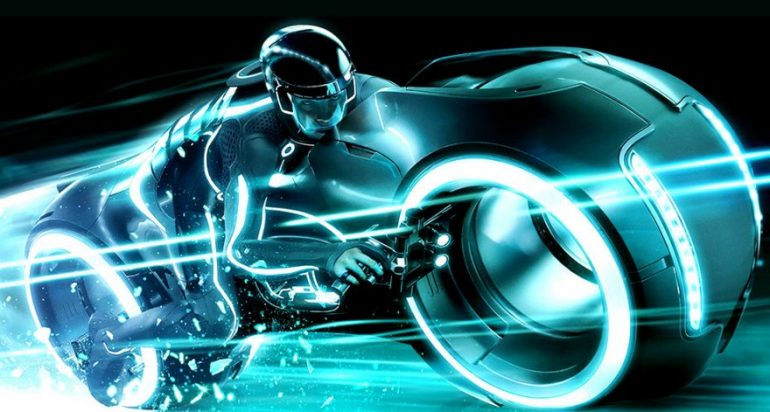 Through a secret door behind one of the games, he finds himself in his dad’s old office, and a touch of the computer sees him sucked into ‘The Grid’ – a computer world created by Kevin Flynn, all those years ago, on which he built a huge software empire.

Sam finds himself a stranger in a world where the inhabitants are computer programmes in human form, the buildings and streets are all outlined in coloured neon lights on a black background and the only entertainment is a series of one-on-one computer games in which programmes fight – or race – each other to the death, using neon-ringed discs or butch light-bikes.

Forced to fight for his life, Sam is taken under the wing of a beautiful programme, Quorra (Olivia Wilde), who leads him through this hi-tech world, where they eventually find his father, living a perfectly respectable life – but unable to escape the confines he himself created, two decades earlier.

Sam and Quorra set out to defeat Clu and help Kevin escape back to the real world – and take back control of the software company that’s being stolen from under Sam’s nose by his father’s devious business partners.

Forget about the story, this film is all about the look.

Anyone familiar with and fond of the 1980s original, in which Jeff Bridges the younger first got sucked into his Grid, will be keen to see how the franchise has been taken on, with tens of millions of dollars of the latest computer technology.

But these people will be older and more likely – now – to require more than effects for a film to entertain them. It’ll be little more than a curiosity for them, while computer game enthusiasts might revel in the graphics for a while, before growing frustrated that they actually have no control over the characters on the screen in front of them.

There’s no doubt that the effects are impressive and the action sequences are exciting, but the plot and characters such attractions are hung on are so pointless and vacuous as to be irritating.

Perhaps the most impressive effect of all is making Bridges look twenty years younger for his Clu persona, which will be lost on audience members who are just after a bit of whiz and bang.

With a thumping soundtrack by Daft Punk, there’s a sense in which this feels a bit like a two hour long dance video and it would certainly look at home, projected onto the wall of a night-club.

This is probably one of the few films that’s worth paying the extra to see in 3D; not because it’s particularly good, but because if the film isn’t worth looking at, it’s not worth seeing at all.