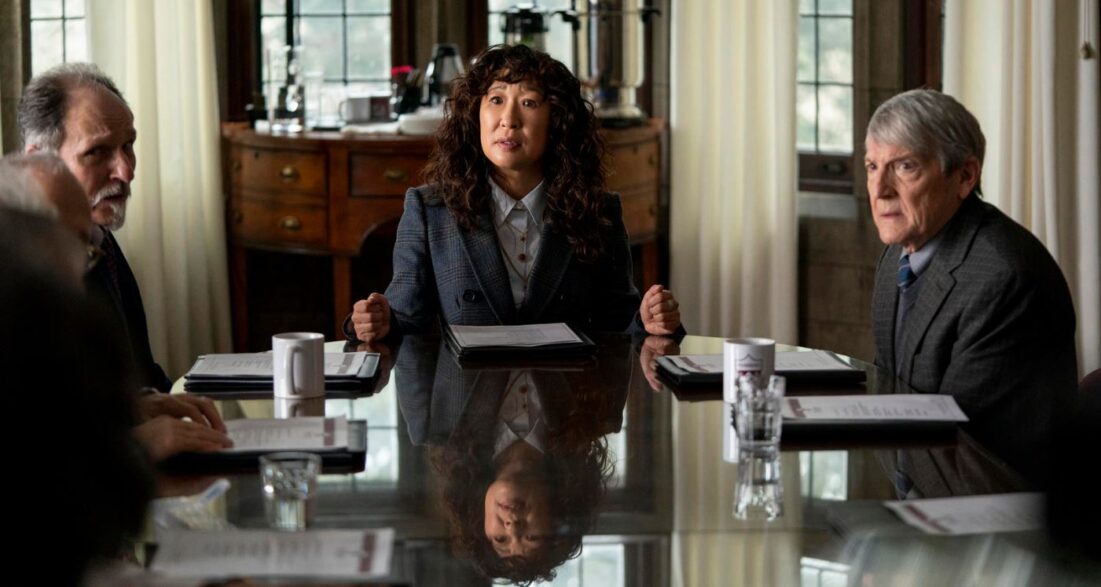 Ji-yoon (Sandra Oh) is the first woman to be elected to chair the largely old, white, male English department at the prestigious Pembroke University.

The first task thrown at her by the Dean (David Morse) is to fire some old timers, who are taking big salaries but aren’t attracting any students.

Then she’s told that in order to boost the profile of the university, a prestigious lecture has to be given by a local writer – the actor David Duchovny – whose credentials she rejects.

Then there’s the little matter of the light-hearted Nazi-salute from one of the professors – Bill (Jay Duplass) – that ends up on social media before the lecture is even over, resulting in calls for him to be cancelled.

Ji-yoon’s position is somewhat conflicted because Bill’s a long-time friend of hers, who helps her look after her strong-willed adopted daughter. But even without worrying about what to do about Bill, she has enough on her plate, trying to keep the struggling department afloat.

It’s almost as if the historic decision to choose woman to lead the department was so that a woman could be blamed when it imploded.

There’s much to enjoy in this brisk comedy drama – from the sharp writing to bright performances; both Sandra Oh’s Chair and Jay Duplass’s troubled professor are diamonds in an otherwise sparkling cast.

The writers get into the story quickly, deftly introducing us to the characters and their backgrounds without bombarding us with exposition. They manage to squeeze a lot into each episode, without it feeling forced.

The Chair embraces a variety of genres without feeling confused; it satirises the pomposity of the stuffy old world order of a university department, while gently mocking the youthful exuberance of the next generation. It supports the progressive notion of female leadership but questions the woke response to a bad joke. It takes an almost snobbish approach to literary criticism, while heralding the necessity of a more modern approach. It combines the pathos of bereavement with dysfunctional family life and a farcical culture clash comedy. All the while remaining convincing.

And when the tale reaches its denouement, it’s not necessarily where you’d expect it to end up.

But perhaps its best quality is its brevity; the whole story is told in just six, half-hour episodes – making for a very easy binge-watch, if that’s your preference. And leaving you wanting more.