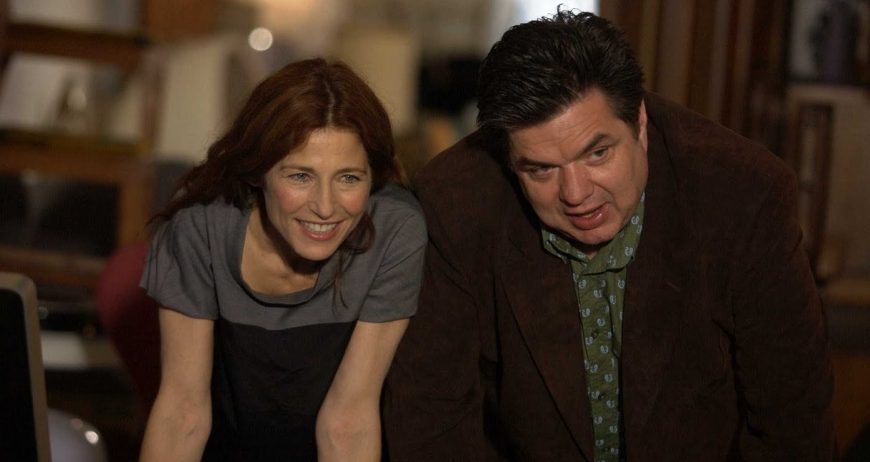 Along a similar theme, they’ve already bought the flat next door, so that as soon as their elderly neighbour Andra (Ann Guilbert) dies, they can knock through.

Kate is starting to feel a bit bad about the extent to which her success and wealth comes from preying on the bereaved. To alleviate her guilt, she’s taken to giving far more money to vagrants than she gives in pocket money to her daughter Cathy (Elizabeth Keener).

In an attempt to normalise their rather odd relationship with Andra, Kate and Alex invite her round for her birthday, along with her two grand-daughters – introverted nurse Rebecca (Rebecca Hall) and image-conscious beauty-therapist Mary (Amanda Peet).

Despite being happily married, Alex is drawn to Mary’s beauty salon and midway through his first ever facial, he can contain himself no longer.

This is a not unusual tale of the intertwined stories of everyday New York folk, musing on their lives and loves in language which is just a little too articulate for the characters.

Apart from Oliver Platt’s relatively minor role and a fleeting appearance by American Pie’s straight-man Thomas Ian Nicholas as Rebecca’s pint-sized beau, this is an almost entirely female affair; as such, it provides an honest and at times enlightening insight into the female psyche – from their insecurities and fears to their dreams and aspirations.

Oddly, in this sense, a film which is clearly targeted at women will probably have more to offer men, as it’ll teach men things women already know about how women work.

Nicole Holofcener doesn’t make many films, but there is a clear common theme – Walking & Talking, Lovely & Amazing and Friends With Money – they all star Catherine Keener – that way you can guarantee kudos before you start.

Please Give is built around Keener and Rebecca Hall – the former delivering another screen-stealing performance, while the latter is effective, although less engaging, as a rather morose and lonely young woman who doesn’t seem to have the get-up-and-go to inject some energy into her life.

But much like with Will & Grace, the supporting characters are actually more interesting.

Platt’s Alex is a wonderfully confused and conflicted character who while totally in love with his intellectual and educated wife, can’t help himself exploring the excitement of the simple and beautiful Mary. He almost makes wilful infidelity seem acceptable. And the way the film handles him being caught is tastefully done – perhaps too tastefully – one of the weaknesses of the film is how despite everyone’s worries, everything just seems to tie itself up nicely without too much drama – and a husband who gets caught cheating really deserves more of a comeuppance.

And Peet’s Mary has the gift of being able to make selfishness and shallowness seem like two of the most desireable qualities in a woman.

With this lack of true drama, this film is built entirely on character – some are more interesting, believable or sympathetic than others.

Ultimately, we don’t really feel that the characters have learned that much or grown as they should, so while it’s harmless enough to spend time with them, we don’t feel we have grown or learned from our experience.

The film is lightweight and likeable – like an Angel Delight – it’s nice enough while you’re watching it but it won’t be particularly satisfying in the longer term and too much of it will start to turn your stomach.