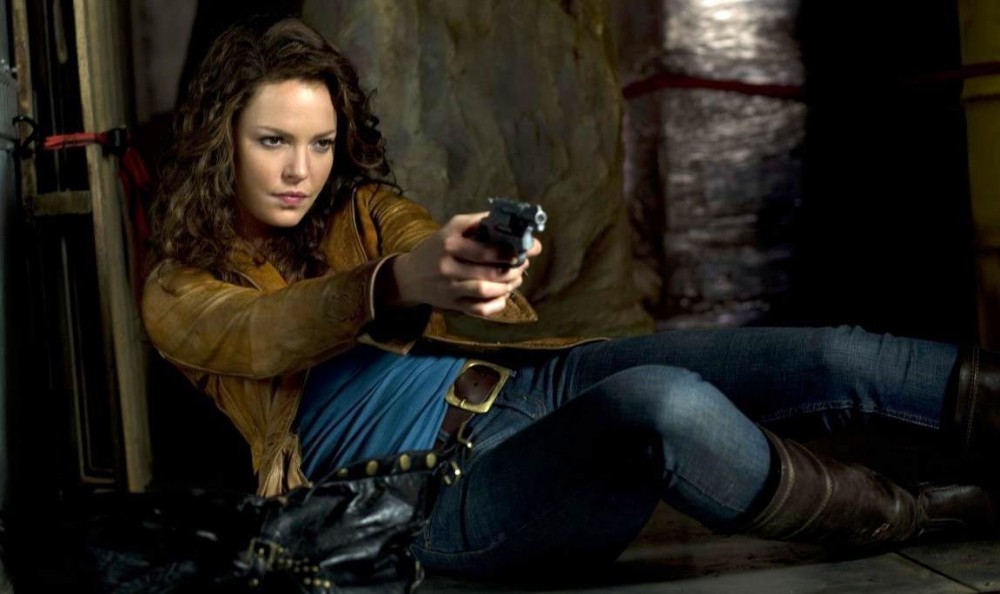 Desperate for money, newly-divorced Stephanie (Katherine Heigl) takes on a job at the family bail-bond company, hunting suspects who’ve missed their court appearances – a role to which she is, of course, completely ill-suited.

As luck would have it, her first target is a former lover and fugitive cop Joe (Jason O’Mara).

Stephanie turns detective to track down her man, with the help of contacts in the police and a mysterious fellow bounty hunter, calling himself the Ranger (Daniel Sunjata).
Her assignment brings her into contact with police, gang bosses and street hookers, while her relatives try to set her up with a completely inappropriate guy – a scenario that has to be a first in modern cinema.

This film is completely misjudged from the poster to the closing credits.

The poster image of a sexy chick doing the “over-the-shoulder” pose, with an alluring smile as she dangles a pair of hand-cuffs behind her screams romantic comedy – but while there are (failed) attempts at both romance and comedy, this film thinks it’s a crime thriller.

The narrative is unbelievable, dull and so linear, it could’ve been written by a child; the first clue leads to the second clue, which leads to the third clue, and so on.

Nothing feels real – from a standing start, she appears to be a seasoned detective who’s missed her calling – when required by the plot, she can handle herself in a fight, but when she keeps bumping into Joe, she fails to bring him in – a rival bounty hunter inexplicably helps her out for no reward or reason – the supporting characters are caricatures straight out of Central Casting; a helpful overweight prostitute and her cantankerous slim buddy – the fast-talking cops – tough gang bosses – an old nudist – the gun-toting granny – the list goes on.

Rarely has a film made it to the big screen with such a careless attitude to continuity – one particular map appears differently on three occasions – and her cousin in the police sports a number of different ranks during the course of the film.

The writing is clearly a problem here – perhaps odd given that this is based on a successful book – but for a film that’s so dependent on the central performance, Heigl fails to hold it together, flipping – from scene to scene – between hapless or cute to cunning or butch.

One for the Money is not worth the money for the tube fare, let alone the cinema ticket and with it coming hot on the heels of New Year’s Eve, Katherine Heigl will need a hit soon if her film career isn’t to peak with the movie that launched her into the major leagues, Knocked Up.

It seems that with each successive role, she’s being knocked further back down again.