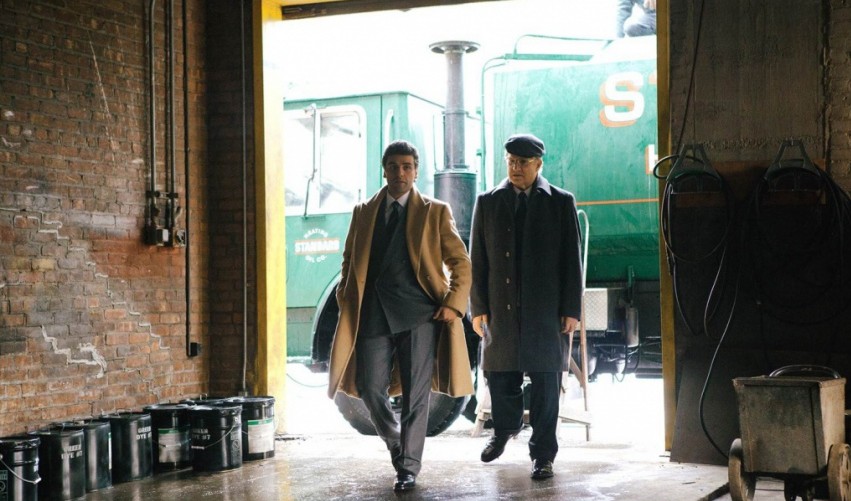 In 1981, Abel Morales (Oscar Isaac) is making a success of the New York heating oil business he took over from his gangster father-in-law. It’s challenging his more powerful rivals and with the purchase of a riverside storage terminal, he’s about to secure an even bigger share of the market.

But his business has run into difficulty, with a number of his tankers being hijacked and the District Attorney (David Oyelowo) is breathing down his neck over allegations of financial irregularities.

When one of his drivers panics at the prospect of being hijacked, he pulls a firearm – the controversy is the last straw for Abel’s financial backers, who withdraw their promise of cash to help him buy the storage terminal.

Without the loan, he stands to lose a million dollars in cash he’s put down as a non-refundable deposit.

During the most violent year in New York’s history, Abel is determined to find the money, without getting on the wrong side of rivals who are less keen than he is to stay on the right side of the law.

Coming from JC Chandor, the man behind Margin Call and All is Lost, and starring the increasingly prominent Oscar Isaac and multi-award nominated Jessica Chastain, expectations for this film might be high but while it’s certainly competent, it’s not as impressive as its provenance might promise.

The title refers not to anything in particular in the film, but to the crime statistics for New York City in 1981; in fact, for a film that looks like it’s being sold as a gangster crime movie, there’s very little violence in it at all. There’s certainly menace – and the threat of violence – but apart from a pair of armed robbers, we hardly even see any guns. In fact, when Abel is advised by the union bosses to let his drivers carry weapons to protect themselves, he refuses; the main character is specifically anti-violence – and despite his wife being the daughter of a gangster, he’s determinedly anti-crime.

This makes A Most Violent Year less of the crime drama the title and atmosphere would suggest and more of the kind of financial drama Chandor gave us with Margin Call, with key elements of this plot revolving around an investigation into allegations of financial irregularities against the protagonist, while he’s trying to raise the capital to purchase a property that will help his business.

The key performances are as impressive as you’d expect – Albert Brooks is always enjoyable and Jessica Chastain is particularly effective as a gangster’s daughter being just a little resistant to her husband’s efforts to clean up the business.

But the plot doesn’t have the tension or drama required to sustain what it appears to be trying to do – and too often, just when you feel the tension is ratcheting up, Chandor appears to pull his punches. It’s a slow-burning tale that never quite catches fire.

There’s also too little character development, meaning that few of those we’re following go on an emotionally engaging journey.

Much of the criticism of this film comes from its failure to meet expectations that Chandor was probably not aiming for anyway, meaning that much of the blame lies with those marketing the film. But everything from his title to characters on the periphery of the murky gangster underworld and cinematography and production design that recall many crime pictures of the 1970s and 80s strongly hint at a very different film that this could have been. It wouldn’t necessarily have been a better film, but if you appear to be promising one thing but then deliver another, even if what you offer is praiseworthy, it will feel somewhat disappointing.