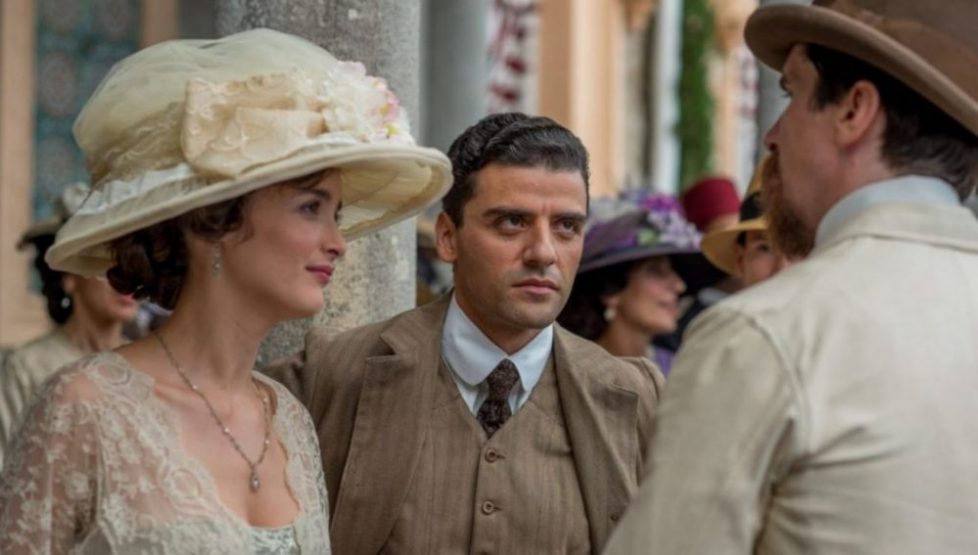 Europe and the Middle East is being torn apart by the First World War.

Mikael (Oscar Isaac) is an Armenian apothecary, living in a small village in southern Turkey. He’s desperate to study to be a doctor, but he doesn’t have the money. He agrees to marry a young local woman, Maral (Angela Sarafyan), when her father agrees to pay a dowry that he can use to travel to Constantinople to study. He promises that they will marry as soon as he returns, with his qualification.

While he’s in Constantinople, he meets the beautiful teacher Ana (Charlotte Le Bon), a fellow Armenian. The pair grow close, but can’t be together, because of the promise he’s made to Maral and because she’s in a relationship with an American journalist, Chris (Christian Bale), who’s in Turkey to report on the growing mistreatment of Turkey’s Armenian minority.

Emboldened by the support of the Germans, the Turkish authorities start to clamp down harder and harder on the rights of the Armenian communities and soon, Armenians in cities are being put in jail and entire villages are being emptied.

As Chris becomes more and more involved in getting the story out to the world, Mikael and Ana are drawn closer together in their efforts to protect their fellow Armenians from the increasing brutality of the Turks.

What the Armenians describe as a genocide, while the Turks continue to reject that description, is one of the few horrific periods of history yet to be immortalised on global cinema screens. We’ve had many films about the Holocaust and slavery, but until now, no western director has brought wider audiences a story set against the backdrop of the deaths of more than a million Armenians.

It would take a bold reviewer to criticise a film about the Holocaust or slavery, lest they be branded apologists for the villains, and similarly, to approach a film about the Armenian Genocide with anything less than utmost sympathy could seen as unduly dismissive of the suffering of millions.

And with this in mind, Terry George, the director of Hotel Rwanda, about the Rwandan genocide, has now turned his attention to the events, just over a century ago, when the Armenian minority suffered in the dying years of the Ottoman Empire.

In order to give audiences unfamiliar with the historic tragedy a way in to the narrative, George frames the wider context around a fatalistic love story, but this turns the film into a somewhat uneven piece of cinema.

The Promise appears to begin as a story about a man who can’t follow through on an attraction to the most perfect woman he has ever met because of a promise he has made to a less than perfect woman back home – but it suddenly, from out of nowhere, morphs into a film about ethnic cleansing.

Either story might have been interesting or powerful in their own right, but both seemed to be diminished by efforts to blend them.

Actors of the calibre of Oscar Isaac and Christian Bale do their best with the increasingly melodramatic material, with Isaac’s efforts hampered by the Hollywood trait of making English-speakers playing foreign characters deliver their lines in an uncomfortably off-putting accent. Charlotte Le Bon, meanwhile, doesn’t have a strong enough screen presence for a narrative of such obvious importance to revolve around. And a handful of cameos, from stars as impressive as Jean Reno and Shohreh Aghdashloo, were wasted.

If the tragic love-triangle could have been read as a metaphor for the wider tragedy – perhaps making the battle for Ana between a powerful Turk and a plucky Armenian – there could have been more merit in George’s structure. But having an heroic American trying to expose the scandalous human rights abuses just makes it feel like Hollywood is less interested in exposing evil than it is in blowing its own trumpet.

It’s also interesting to consider that while most of the world accepts that the Armenians were the victims of a genocide, the Turks still don’t, so this film coming out at a time that the increasingly nationalistic President Erdogan has just extended his powers raises the interesting question about how the film has gone down in Turkey – and the answer is not very well, with organised online campaigns to denigrate it to wider audiences.

Financed by an Armenian-American, the film unsurprisingly feels disappointingly simplistic and one-sided; all Armenians are victims, all Turks (except one) are evil.

And for a film whose story is painted over a canvas as huge as this, it feels peculiarly parochial and low-rent, almost more suited to TV. Cross-country journeys that would surely have taken weeks to complete appear to take just hours, for the expedience of the plot, and there’s little sense of the historic importance of what was unfolding; that, though, is perhaps a true reflection of what the world thought about it at the time – although it was, perhaps, swept under the carpet in the first place largely because most of the rest of the world was involved in its own existential struggle in the First World War.