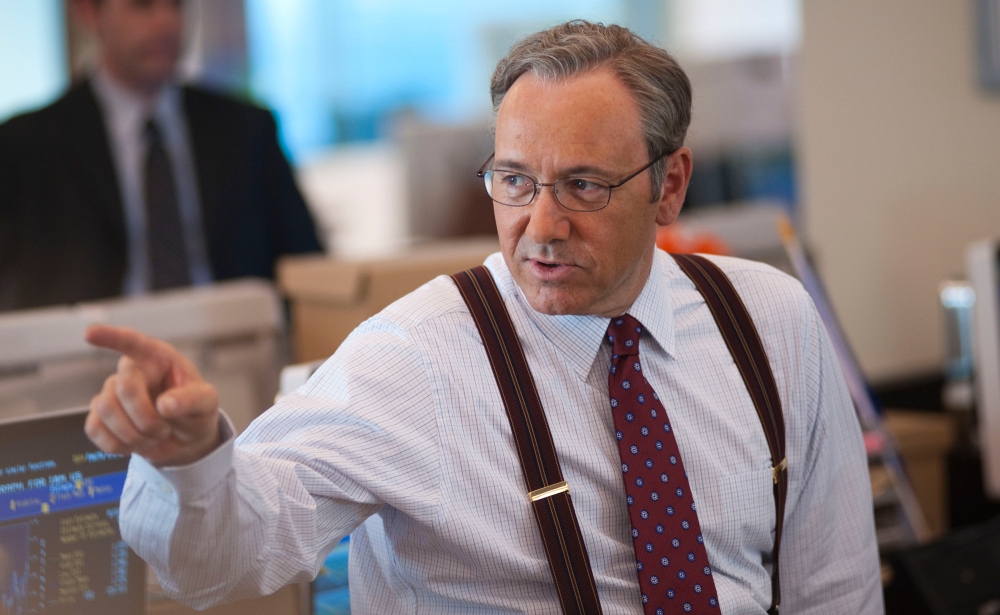 Wall Street, as the global banking industry is about to crash, and a young analyst, Seth (Penn Badgley) and his mentor, up-and-coming trader Peter (Zachary Quinto), discover that the figures just don’t add up.
They call their manager Will (Paul Bettany) back from the bar and he’s concerned enough to call their boss Sam (Kevin Spacey) back to the office, well after hours. This is not something they can deal with themselves.
But even Sam doesn’t have the answers. He calls in his own bosses, Jared (Simon Baker) and Sarah (Demi Moore) and berates them, saying he warned them that things were going in this direction, but they failed to act.
But when they’re confronted with the reality that their bank’s assets were worth nothing like as much as they appear on paper, they can see only two solutions: sell their assets to traders who have no idea they are actually worthless, or swallow the biggest losses in Wall Street history and risk going under themselves.
When the bank’s owner John (Jeremy Irons) arrives by helicopter in the early hours of the morning, he has no doubts about which way to go.
A long night of number-crunching and nail-biting presents a major New York bank with a moral dilemma – kill or be killed.
The latter would destroy itself; the former would destroy the whole industry.

JC Chandor’s fictitious tale of banking provides an insight into the kind of decisions that will have led to the global financial crisis that has plunged the world’s economies into their most prolonged downturn for decades.
He presents us with good guys, bad guys and pragmatic guys – we get black and white, but also plenty of grey.
The black and whites of Simon Baker and Zachary Quinto respectively are the engines that drive the plot, but dramatically the least interesting characters.
The tension hinges on the turmoil beneath the skin of the greys – Kevin Spacey and Paul Bettany – as they sway between what they feel is right and what they know is necessary.
They’re observations of the banking industry and the reliance of the public on it show us that the grey – and even the black – extended well out of the banking boardrooms and into the world of those who begged and borrowed from the bankers they now despise.
It’s a fiction – but it’s convincing and feels revealing.
With a producing credit as well as a good-guy role, this is clearly a passion-project for Quinto, but it’s refreshing to see so many big names involved in what’s clearly a small project, which could seem worthy at first glance but turns out to be surprisingly gripping.
Much of it feels a little too much like a talking shop, with characters flinging jargon around above the heads of the viewers and there are times when anyone without an economics degree might have to take plot points on trust.
But it’s enlightening, enthralling, frightening – and shockingly, anyone who likes the idea of earning money – and let’s be honest, who doesn’t want to earn some money? – can’t help but harbour as much admiration as resentment for those who shamelessly have the guts to push for what they can – putting their goals before anything and anyone else.
From the outside, you’ll hate them – but wouldn’t you just like to feel what it’s like to be on the inside?
It’s a margin call.