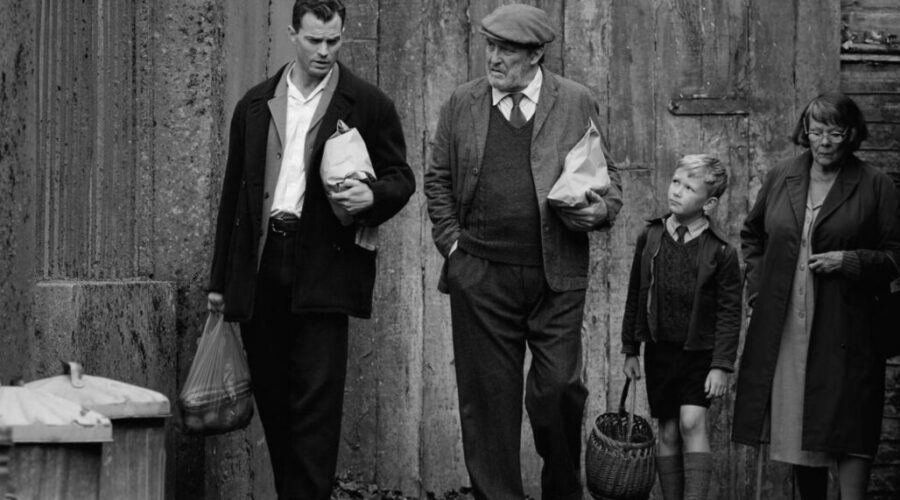 It’s 1969. Tensions are growing between Protestant and Catholic residents of Belfast and primary school boy Buddy (Jude Hill) is trying to make sense of the world around him.

Protestants erect barricades to keep the Catholics out of the street; Protestants who refuse to intimidate Catholics are threatened by their neighbours; shops are looted; and against this backdrop, Buddy’s parents (Jamie Dornan and Caitríona Balfe) are struggling to keep life on track, considering work – or even life – outside Belfast.

But Buddy is more interested in catching the eye of a girl in his class – and making sure he’s never too far from his doting grandparents (Dame Judi Dench and Ciarán Hinds).

Sir Kenneth Branagh’s most personal film to date – variously described as autobiographical or semi-autobiographical – depicts the Belfast of his own youth, as his own family was preparing to move to England to escape The Troubles.

We see the events unfolding – in sumptuous black-and-white – through not young Kenneth’s eyes, but “Buddy’s – his nine year old proxy – in not so much as a coming-of-age tale as a slice-of-life.

Buddy witnesses the growing tensions in the community – but doesn’t really understand them; it all largely goes over his head. He sees the effect it’s all having on his parents, but getting girlfriend advice from his Pa and Pop is what’s mostly on his mind; one of the biggest obstacles being that she’s Catholic.

Caitríona Balfe is the hard-headed pragmatist, holding the family together, as Jamie Dornan makes regular work-trips to England and Granny and Pop – as the grandparents everyone will want – provide the constant support for young Buddy, who’s learning to build a life as his community is crumbling around him.

This is a good-looking, charming tale that doesn’t quite have the heft you might expect from a film depicting such a fractious time, when history tells us the worst was yet to come, while for the characters, they’re just hoping for the best.

Given the horrors that were to come, it might seem like Sir Kenneth is tip-toeing around reality and only skimming the surface with his almost saccharine recollections, but it’s refreshing to see the conflict developing from the point of view of the children who’d have to live with its consequences.

Belfast doesn’t so much portray the city as it does this crucial point in its history, through the eyes of one boy in one street. It’s a touching tale during a troubling time that will resonate, in particular, with those who’ve had to reconcile their future with their past and find their place in the world.